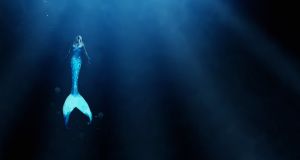 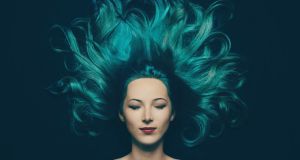 Mahalia rose from the water. She glided across, elegant as a swan. Her hair was dark blue and billowed behind her in the wind. Her tail was lilac and her eyes shone a bright blue and her face looked kind and welcoming. She made her way over to the man, with a subtle smirk on her face. As she got closer, she began to sing softly. Her voice was angelic as it drifted across the water to him. It was the most beautiful song he’d ever heard and he was immediately under her spell.

He stood at the very edge of his boat, completely transported by her beauty. Her hand was outstretched and he felt her calling out to him. He reached his hand out, every bone in his body willing her to come closer. His mouth was wide open in awe. Mahalia licked her lips slowly. Then as she reached him her face changed. It became dark red and her smirk changed to a frown. She made a loud hissing noise.

The man jumped but it was far too late for him, for he had already been chosen. Her hand gripped the man’s hand so tight, his face was covered in pain and panic. Suddenly, she made a jolted movement and pulled him into the water. As he went down he screamed and yelled, but that was all he could do now. Mahalia wrapped her tail around his neck. He noticed her eyes still had that same kindness in them. A single tear made its way down her cheek but she continued to squeeze his neck tight. The man could see other mermaids like her approaching. As he began to close his eyes, she whispered quietly in his ear: “I’m sorry.” And he was gone.

She lay in her chamber with an expression across her face that could only be described as despair. Her mother Attina barged into the room. She was beautiful. Her hair was a gorgeous dark-red and her tail was as black as the night. Attina held her head high, as she always did. She always had the same air of confidence about her. Attina floated over the quivering girl in a powerful manner. Mahalia began to shake profusely. She knew what would happen next.

Attina raised her tail and slapped Mahalia hard across the face with it. She collapsed to the ground, wailing, consumed with self-pity as her mum continued to hit her. “You were supposed to get five men for us! You broke down crying after the first! I should send you to ‘the cage’, you’re old enough to handle yourself there now!” Attina shouted.

“Kindness?” she screamed, “Mahalia what did I teach you? Sirens don’t need love or kindness, and we don’t have it! Now cop on and go and get us four more men or we’ll all starve!”

Mahalia left her chamber and braced herself for what would be a long night. Her hands were shaking and again tears formed in her eyes, but she pushed them down. She would be strong. She wouldn’t be a disappointment. As she swam towards a boat that was floating on the water she thought of the hundreds of things she wished she could do. She wished she could hop on the man’s boat with him and go live somewhere else. But she also knew that as soon as she stepped on land, that would be the end of her.

All she kept thinking about was that innocent man she had just killed and the four more she had to kill tonight. Mahalia hesitated but then readied herself for the kill. As she slowly rose from the water she saw it wasn’t a man on the boat, but a woman. A beautiful woman. She had curly blonde hair and pale white skin.

Mahalia bobbed on the water staring at the woman. For once she was the one who was enchanted. She stared at the woman for a good hour until she heard splashing behind her. She turned in a panic of realisation that she had been there for too long.

Her mother was behind her with hatred in her eyes. “If you weren’t my daughter I swear I would kill you right now, Mahalia! You’re useless! Watch how it’s done.” Mahalia began to try and tell her mum, “Mum, no!” But she was already on the water singing. Mahalia remembered how she used to sing to her when she was young. They would sit on the roof of the castle and her mother would sing the most beautiful songs to her. But now she wanted the music to stop, she knew she had to try and warn her mother.

Mahalia jumped from the water and tackled her mum. Attina let out a sharp scream and bit her daughter in the neck. “Mum! It’s a woman! You can’t kill her. If we eat her we could die anyway.” Attina stared coldly at her daughter, weighing her options. But Attina knew she had to teach her daughter. “I’m going to kill her anyway to show you that this is how we live.”

Attina rose to the water again and began to sing. Mahalia knew in her heart she could never talk to the woman anyway, but still she felt her heart snap in two. She had never seen someone so beautiful and now her mother was about to take that beauty away. Just as her mother always did. She took away the best things in her life.

Mahalia remembered how when she was younger her grandmother, who was now dead, had bought her a beautiful violin. She played that violin every day and she had never loved anything more. When she turned 13, she walked into the sitting room to see her mother throw the violin in the fire. She said it was distracting her from learning to hunt.

But Mahalia had never forgotten that day, because that was the day she realised she hated her mum. And not just a playful kind of hatred. The kind of hatred that rose from inside Mahalia every time she saw her. The kind of hatred that made her blood boil and she felt like she would explode. She watched as her mum neared the woman. And when she got close enough she . . . Mahalia couldn’t watch the rest. She shut her eyes tight and tried to block out the sounds of the screams. She vowed that day that she would never be like her mum. She would make her own path in life.

Marita Conlon-McKenna: ‘I didn’t think I would write another Famine novel’
9