The Meath files: Attack planned for Sunday, when RIC officers would be at Mass 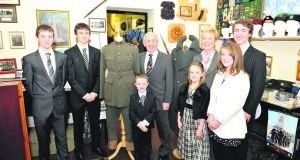 The Boylan Family with the uniform and greatcoat of Sean's father, also Sean, who was a general in the Irish Army in the first part of the twenties. Pictured are, Sean Boylan his his wife Tina, and hteir six children, Seán, Ciarán, Daire, Doireann, Aoife and Orán.

Meath may be unfairly known as the “Royal County”, as many IRA and Cumann na mBan members were active there throughout the War of Independence.

The IRA’s most successful military operation in the county was its capture and destruction of the formidable Trim RIC barracks in September 1920, described by Michael Collins as “a very big job”.

The attack was meticulously planned by the local IRA, with assistance from RIC informants, including an officer who had resigned in protest over the British plan to introduce conscription in Ireland.

Seán Boylan of Dunboyne, whose son went on to lead the Meath GAA senior football team to four All-Ireland victories in the 1980s and 1990s, was O/C of the Meath Brigade and the Ist Eastern Division at the time.

Sunday September 30th, 1920, was selected for the attack because the IRA had intelligence the RIC District Inspector resident in the barracks would be away and several of the RIC garrison would be attending first Mass at 8am.

In a witness statement to the Bureau of Military History, Cmdt-Gen Boylan said when he told Michael Collins of the plan to attack Trim barracks, Collins commented: “It’s a very big job.”

It would have been “impossible to take the barracks with the arms at our disposal so we relied on strategy”, Boylan recalled.

The plan involved about 150 IRA, including in blocking all but one of the roads within a radius of eight miles. Thirty-six volunteers, split into three sections, were used in the attack itself. One group scaled the 15ft-high wall of the barracks early that morning, just after several of the 28-member garrison had gone to Mass, and got in an open side door, taking the RIC by surprise.

A head constable, whom Boylan said drew his revolver, was shot and later died.

The IRA rounded up the entire garrison and kept them in the yard while they seized arms and ammunition, after which they set the barracks on fire.

The RIC officers who had gone to Mass were captured as they left the church, including one who tried to hide in a confessional. They remained under IRA guard until the barracks operation was completed.

The British authorities’ response to the attack was swift and vicious.

A party of Tans and auxiliaries arrived in Trim that Sunday night and looted and burned many premises in the town, including shops and the homes of parents of leading IRA men. Several volunteers were arrested and later interned.

Boylan, who got word via a priest that his own house was to be burned, sent back a message “that as long as I could elude the enemy and preserve a whole skin, I did not care if my house was burned”. The priest was also asked to have the RIC and Tans informed “that if my house or any other Volunteer’s house in the brigade area was burned down, I would have every British loyalist house in Co Meath burned as a reprisal”.

The warning was “apparently heeded as my house was not burned”.

Trim made headlines again weeks later when six RIC men attached to Trim Barracks were ambushed on January 26th while on patrol on Haggard Street. Three were wounded and a 23-year-old constable from London died from his wounds on February 2nd.

Earlier in the War of Independence, The Times of London lamented that an IRA raid on Dillons Bridge Barracks near Navan on November 2nd, 1919, appeared to be “part of a well organised plan”.

It reported a police sergeant was shot in the face but the raiders retreated when they ran out of ammunition, leaving four bicycles behind.

Co Meath, the newspaper assured, “has been one of the most peaceable and law abiding parts of Ireland and it will probably be found the raiders came from a long distance”. That assumption was misplaced, as Brigade Activity Records show the raiders were local members of the Meath Brigade.

Brigade Activity Records indicate a number of planned operations did not proceed for a variety of reasons, including communication failures, enemy intervention and lack of arms.

Elaborate plans for the capture of Sylvan Park House, whose female occupants were described as “of planter stock” and regarded as enemies, were aborted on April 1st, 1921, as a result of a post car arriving on the scene early that morning. The IRA’s capture of the postman led to the RIC and Tans rushing to the scene.

In July 1920, a car in which IRA members were ferrying a prisoner charged before the republican courts with stealing cattle, came under fire from British forces.

IRA commandant Séamus Cogan was shot dead, two volunteers were wounded, and the car later crashed into a field. The IRA got Cogan’s body to a nearby farmhouse and one member managed to get a priest to the scene. The plan was to await transport to remove the body but the enemy arrived at the scene and opened fire. Three IRA men and the priest managed to escape but Cogan’s body was captured.