Opinion: How was the Great War forgotten by so many for so long? 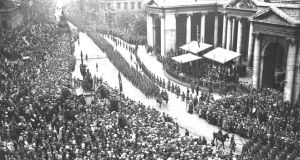 Irish troops returning from the Great War march in a Victory Parade, at College Green, Dublin, in 1919. Some boycotted this parade and thereafter the veterans were treated with diffidence, hostility or indifference. Photograph: RTÉ Stills Library/Cashman Collection

The Irish soldiers who survived the Great War returned to a very confusing Ireland. Edward Carson in 1920 could complain to Lloyd George that it was “practically impossible” for any veteran to obtain employment in the south and west of Ireland.

But Carson was on the back foot. He had been asked by Lloyd George to examine a complaint by a returned war veteran to Belfast that he had been hounded out of the shipyards because of his Catholicism. Michael Cunningham, writing from Co Durham, had informed his west Belfast MP, Joseph Devlin, that he found himself “a disabled ex-serviceman” who had “been driven from wife and family to look for a living amongst strangers”. He appealed to Devlin “to expose the infernal lie that none but Sinn Féiners was expelled from work in Belfast”.

He declared his politics: he was an Irish nationalist. He had spent more than three years in the war; his eldest son, Joseph, had spent longer and his next son had joined up six days after his 18th birthday. They were now “all suffering from wounds or gas yet were refused the right to earn their living in Belfast”.

His income not being sufficient “to keep two houses, one here, and one in Belfast”, he now appealed to Devlin to help him get a house in England “the country I fought and was wounded for”. Cunningham was not alone among Irish nationalists to discover he had not returned to “a land fit for heroes”. Many had gone to the war confident Ireland was among the small nations for whose freedom they were fighting. They now found it was Pearse’s Ireland, not Redmond’s, that they were expected to espouse as the “historically correct” aspiration for Irish nationalists.

There was little room for compromise. As WB Yeats put it: “who can talk of give and take . . .while those dead men are loitering there.” Historian Nicholas Mansergh echoed Yeats’s point. After the Rising, the minds of the living were overshadowed by the “rigid, inflexible doctrines of the ‘martyred’ dead”.

In particular, Pearse’s warning of the immense infidelity of accepting anything less than full separatism were words that served to undermine the possibility of constitutional compromise and Pearse’s “irreconcilable spirit still haunted, or inspired, the minds of the Sinn Féin leaders. That was their tragedy.” The Rising had proved “a challenge to those Irishmen who believed in compromise. It was a challenge which they could not meet. History was against them.”

History was also against the returned veterans from the Great War. Some lost their political bearings and avoided politics. Some others attempted to forget the war and rarely spoke about it thereafter. But it was one thing for them to forget the war: quite a different matter for the Irish collective memory to discard it.

That the new generation of politicians would concentrate public attention on the 1916 Rising was scarcely surprising. Were they themselves not the beneficiaries in the 1918 election of the changed mood of nationalist Ireland in the aftermath of the 1916 executions? Indeed many had been precipitated into political careers by their involvement in the Rising and its aftermath.

Politicians everywhere have a tendency to appropriate those parts of the past that best suit their immediate purpose. But why did the rest of nationalist Ireland so ignore the complexity of what happened in the second decade of the 20th century? How was the Great War forgotten by so many for so long since it was a war in which more Irishmen fought, and more died, than any war in Irish history?

One of the most telling contributions to what was a relatively unimpressive performance by Irish historians on the occasion of the 50th anniversary of the 1916 Rising came from a medievalist, Prof FX Martin. He reminded us that for every volunteer in the 1916 Rising, there were 16 Irish nationalists serving in the trenches.

Outside Northern Ireland, he suggested, it was “difficult to find men and women who will acknowledge that they are children of the men who were serving during 1916 in the British army, the RIC, the DMP, and Redmond’s Irish National Volunteers”. This, Martin termed the “Great Oblivion”, a case of “national amnesia”. In contrast he noted how many claimed a family connection with the men who rose in 1916 “or at least assert that a grandfather was in the IRB.” During the 1920s, he wrote, it had been “a current witticism that the GPO would need to be four times its size in order to hold all who claimed to have fought there during Easter Week”.

Martin published that article in 1967. The outbreak of the Northern Troubles soon afterwards resulted in a further marginalisation of the role which the Great War had played in Ireland. Nowhere was this more underlined than by the period of philistine neglect of the Irish National War Memorial at Islandbridge dedicated to those who had died in the war. Horses grazed there and the memorial was vandalised and defaced.

And how does one explain how an organisation that thinks itself republican planned to target a war memorial in Enniskillen in 1987? Bomb it in the middle of a remembrance Sunday gathering of the relatives of those who it honours? Happily, the Edwin Lutyens memorial at Islandbridge has since been restored and the Enniskillen memorial has witnessed southern leaders joining in the annual Remembrance Day ceremonies.

The centenary of the outbreak of the Great War provides an opportunity to emphasise its extraordinary impact on Ireland. But commemoration is different from history. It remains the historian’s task to analyse the past with as open a mind as possible.

Sean O’Faolain once wrote that among the challenges facing Irish politicians was “what to do with our lovely Past”. Today’s answer might be to try to understand it while seeking complexity rather than simplicity. Perhaps the avalanche of journalism, broadcasting and books to mark the centenaries of the 1912-1923 period will have the effect of making that complexity more widely understood.

But we should also remember that compared with so much of the rest of the world, the number of deaths in Ireland from war or civil strife during the past 100 years is but a fraction of those endured elsewhere. Within Ireland we have had a comparatively peaceful 100 years – all the more reason why we should remember our largest casualty list, those Irish who lost their lives abroad during the Great War.

Dr John Bowman is a broadcaster and historian. He presents The Forgotten War? Ireland and World War 1 on RTÉ One television on August 5th, at 10.35pm.

YA fiction: Growing up black in the US
7