The Famine changed everything – and nothing 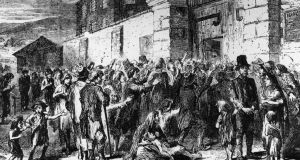 1846: starving peasants clamour at the gates of a workhouse during the Famine. Photograph: Hulton Archive/Getty Images

The English Quaker documented what he saw, bringing seeds for turnips and carrots to Mayo and Donegal in an attempt to diversify crops beyond the blighted potatoes, and subsequently published the book Six Weeks in Ireland.

“It was melancholy in the extreme to see the women and girls labouring in mixed gangs on the public roads,” his report about Ballina read. “They were employed not only in digging with the spade and the pick but in carrying loads of earth and turf on their backs, and wheeling barrows like men, and breaking stones; while the poor neglected children were crouched in groups, around the bits of lighted turf in the various sheltered corners along the line.”

The Famine horrors in Ballina were also documented in local media: “In some places the graves are so shallow that portions of the coffins are visible above ground,” a report about a cemetery in Ballina ran in the Tyrawley Herald 1847.

This brings us to an Irish Times article from January 1860. “From time to time we have gladly noticed signs of progress in the West of Ireland,” the article began. Bear in mind this was just a decade after the end of the Famine. The article cited all of the benefits of living in the west, much like how contemporary media exalts the joys of leaving urban centres for rural living: “The noble bays, wide sweeps of fertile land, the majestic mountain scenery and those tarns lying like mirrors among them – all endear the West to us. We thought how gladly would the citizen of this or any other city exchange for a while the never-ending toil of business for the free, pure air – the heather breathing of health, and the grand open sea of the West of Ireland.”

The article spoke of the latest fashion of city-weary folk heading west for their holidays. “We saw how the denizens of smoky towns could obtain summer lodges down by the sea for a moderate rent, and give the children, pent up at home, free roaming among the everlasting hills.”

But then the digs about local politics start. Ballina, the journalist wrote, has a “quasi Corporation or a provincial Parliament”, and the town also had “orators and patriots. As the French have not landed again in Killala Bay, the Corporators, to maintain their dignity, turn upon the owners of the soil to keep themselves in practice.”

However, all was not well. The River May commissioners, “whose duty it is to survey and buoy the harbour, erect cranes, and facilitate the general traffic of the place”, and whose work has helped the commerce of the town increase fivefold, were about to have their powers changed, with a new bill to reconstruct their body. The commissioners had decided that new commissioners should be “chosen from those who were rated at £80 a year, or possessed £100 a year, or were the owners of £2,000.” This caused the Ballina town councillors great indigence, calling the proposition “exclusive and aristocratic, and, not rightly knowing, we suppose, what to do, accuse the present Commissioners of malversation of the public funds!” The Irish Times appears to be very much on the side of the commissioners, saying that one of the harbour commissioners owned most of the town, so surely had a vested interest in making it prosper. Those who have a stake in the town, the paper declared, “should be at the head of all efforts for its improvement”.

Even in the aftermath of catastrophe, the arguments typical of local politics and commerce prevailed. Needless to say, Ballina is still going strong.