The Ballad of Reading Gaol: Wilde enthusiasts lead campaign to save site 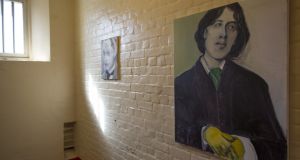 A portrait of Oscar Wilde hangs inside a cell as part of an exhibition at Reading Gaol in 2016. File photograph: Dan Kitwood/Getty Images

The Ballad of Reading Gaol is not only one of Oscar Wilde’s most famous works – it is also one of the most important poems of the 19th century. Written in 1897, the 109-stanza poem details a hanging Wilde witnessed while incarcerated in Reading Gaol.

That poem immortalised the jail, but despite this, the prison has now been sitting vacant for five years. The large, sprawling site was closed down in 2014 and the ministry of justice in the UK recently announced its intention to sell it in order to find “the best outcome for the taxpayer”.

Now, Wilde scholars and enthusiasts – as well as Reading politicians and artists – are deeply concerned about the sale of a prison that is steeped in cultural history. Some are worried that the jail could be redeveloped into housing, apartments or a hotel.

Darcy Sullivan of the Oscar Wilde Society says that Reading Gaol is a significant site and argues that it should be protected for myriad reasons – including its connection to the gay rights struggle.

“Wilde served the last 18 months of his prison sentence at Reading Gaol when he was convicted for gross indecency,” Sullivan says. “This is an important piece of British history, and it’s also an important site for the LGBTQ community. I think Reading Gaol has a sort of symbolic importance, kind of like Stonewall. It obviously didn’t inspire riots, but I think it has that same sort of resonance as a place where something very important happened in the gay rights struggle.”

Sullivan says that visiting the prison and seeing where Wilde was incarcerated is “chilling” – and argues that the feeling cannot be replicated by reading about it.

“To be there and think, ‘That’s where he was,’ and why was he there? He was there because he was a homosexual, and because that was an affront to Victorian society.”

The prison is also historically significant outside of the LGBTQ rights movement. Wilde was changed by his time in prison, biographer Eleanor Fitzsimons explains. His physical and mental health was damaged by the experience, and when he got out, he was inspired to campaign for prison reform.

“He started writing to newspapers about the fact that children were still being imprisoned,” Fitzsimons says. “He wrote so eloquently and campaigned so effectively that some of his suggestions were actually adopted in British parliament and became law.”

Fitzsimons agrees that the prison holds great literary and cultural significance, and she too would like to see it retain some connection with the arts.

“It only has the reputation it has because of its connection to Wilde,” Fitzsimons says. “There are some other famous connections, but really Wilde is the main one.”

Reading Gaol is an extremely large building and because of this Fitzsimons believes there would be enough space for it to serve several purposes. She would like to see it being used as a theatre or artistic space, but would also like to see it used as an educational space such as a theatre school.

“I think it would be great if they could justify and keep it as an arts centre. If a realistic, viable bid was put in, it should be looked upon favourably.”

Labour MP Matt Rodda has been heavily involved in the campaign to develop Reading Gaol as a cultural site. Last May, he started a petition calling on the ministry to reconsider and to instead sell the prison to a bidder who would keep it as an arts hub. His petition has been signed more than 7,000 times.

“I think it would be the most amazing thing for our town and internationally if we could do this,” Rodda says. “I do think in a way that it’s a world heritage site because of its connection with Oscar Wilde and Ireland. It’s really important to preserve it as a site for the arts, and what a wonderful inspiration to actually be able to go and see it yourself.”

Three years ago, the prison was opened temporarily for an exhibition centred around Wilde by Artangel. Rodda would like to see something similar going forward. Theatre and Arts Reading along with Reading Borough Council are putting together a bid for the site, and Rodda hopes they will be successful.

“The space actually lends itself to being used for displays and screens because of the way the cells are laid out,” he explains. “There are all sorts of possibilities for exhibiting things and for inspiring a new generation of artists, which I think would be the most amazing tribute to Oscar Wilde.”

Rodda also agrees that the site holds historic significance for the LGBTQ community, and would hate to see that sense of history lost.

“Reading Gaol helps us nowadays to understand the dramatic changes that have happened and still need to happen to have full equality for gay people. I think it has huge symbolic importance for people all across the world.”

He believes that individuals within the ministry of justice understand the significance of Reading Gaol, but says that – as an organisation – they are missing the point.

“There’s a bit of a lack of imagination there, so I’m working really hard to push them,” he says. “I do hope that we can save the jail and preserve it in a way that allows us to enjoy it and be able to understand the things that happened there – but that’s dependent on a bid being accepted that’s not a commercial bid.”

Rodda believes it would be “deeply sad” if the prison was developed as a hotel or apartments. “I think it would just be completely inappropriate given its history. There are building companies and development companies that specialise in rebuilding and refurbishing jails and turning them into other things. It would be really awful to have the fabric of this jail changed forever in the mistaken attempt to make a small amount of extra money for the government.”

The site is on the market until December 6th, but as of yet, Rodda has not been made aware of any major bids coming in.

“What we hope is that there won’t be [a major bid], and the ministry of justice will reconsider and accept a bid where they will get a little bit less cash for the site, but in return they get very positive community, social and international benefits.

“Irish literature is so rich and so incredible, and this is a wonderful site that is in England that’s linked to one of the most important Irish writers,” Rodda adds. “It’s important for all of us to be able to share in that history and be able to experience the site. It would be a real loss for people in Ireland and for Irish people all over the world if they weren’t able to come and look at his cell and go inside the jail.”

The movement to keep the jail open as an arts or cultural centre has been helped along in no small part by Linda Saul, an artist who lives in Reading. On October 13th, she hosted a “Reading Gaol Hug” where she encouraged people to come out to form a huge circle around the site to demonstrate how much it means to them. She estimates that between 800 and 1,000 people attended.

“I got really passionately interested in it a couple of years ago when I first read The Ballad of Reading Gaol and started to understand more about Oscar Wilde,” Saul says. “I was involved in an arts project to do with Wilde – that’s when I read the ballad – and I thought it was a lost cause to have it as a theatre. But then a couple of months ago, I heard that [Matt Rodda] had started a petition to keep it as an arts hub, and that’s when I realised that there was something to fight for – that there was a possibility that we might achieve that aim.”

Saul believes a theatre at the site is “essential” because of the connection with Wilde. “It would be great if people could start going to see Oscar Wilde productions in Reading Gaol,” she says.

The UK is typically good at preserving its history, Sullivan adds. He is now hopeful that the ministry will see the cultural and artistic significance of Reading Gaol and ensure the site is preserved in a meaningful way.

“It is an important place, and it’s easy to overlook because nothing good happened there – but that’s exactly why we need to save it.”