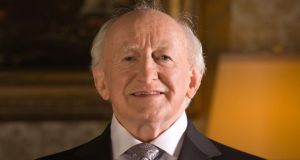 The President is descended from Vikings, the Taoiseach is of unknown origin and, despite five years of austerity, the Minister for Finance remains “beloved”, at least by nominative inheritance.

Those are among the implications of the largest-ever survey of British and Irish surnames, carried out by the Bristol-based University of the West of England (UWE) and published by Oxford University Press.

The four-year study traced the linguistic origin, history and geographic distribution of 45,600 names, and explains 8,000 for the first time. Among the continuing mysteries, however, is Kenny.

Like most Irish surnames, the Taoiseach’s is based on family relationship, and presumed to derive from somebody called Cionadh. But although its main Irish distribution is indeed the west, “Galway and Roscommon”, the UWE declares Cionadh to be of “unexplained etymology”.

The President, by contrast, is a confirmed Viking, or at least that’s where the name O’Higgins comes from: the Old Scandinavian “vikingr”, meaning “sea rover”.

Critics of austerity might also have hoped to hear hints of pillaging in Michael Noonan’s ancestral name. But no, according to the UWE, his is from a diminutive form of Ionmhain, meaning only “beloved” or “dear”.

Even simple-sounding names do not always mean what you might think, the survey confirms. Take that of Irish rugby captain Rory Best, for example. It could be from the Old English “betst”, meaning “best”, or the Old French “beste”, meaning “beast”. Mind you, they work equally well for a front-row forward facing the All Blacks.

But the survey has no good news for the many people of Irish descent, including the famous American family called “Kennedy”. It confirms the name’s main concentration here as Tipperary. It also confirms its origins in the Irish “ceann”, meaning “head”, and “eidigh”, meaning “ugly”.

Interestingly, in the wake of Leonard Cohen’s death, the UWE records an Irish version of that surname, variants of which include former taoiseach Brian Cowen. There is no relation between the names, it seems, but there is a pleasant coincidence.

Cohen cited the Irish writer James Joyce as one of his big influences. And the Irish “Cohen” is said to be an anglicised derivative of cadhan, meaning “barnacle goose”, which is in turn sometimes anglicised as “Barnacle”, as it was in the case of Joyce’s wife, Nora.

Some old name origins resonate with their modern owners. The late Charles Haughey, for example, was often seen (and photographed) on horseback, no doubt well aware that, as the UWE points out, Haughey derives from “eachaidh”, “horseman”.

Then there was his old sparring partner, the Rev Ian Paisley, whose surname sums up the tangled history of Scotland and Ireland. Its immediate derivation is from the Scottish place name. The place name, however, comes from “baslec”: Old Irish for “church”.

The Oxford Dictionary of Family Names in Britain and Ireland stretches to a hefty four volumes in its print edition, although it also comes in digital format. The price is hefty too: £400 (€467).