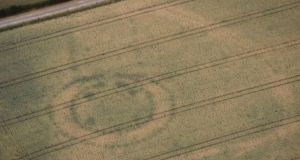 It is believed to have been built 500 years after Newgrange. Photograph: Department of Culture, Heritage and the Gaeltacht 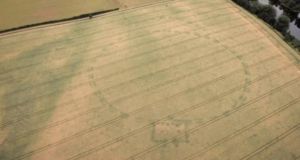 The henge has now been added to the record of national monuments. Photograph: Department of Culture, Heritage and the Gaeltacht

The henge discovered near Newgrange, Co Meath last week may be astronomically aligned.

Anthony Murphy, who discovered the henge, confirmed on Friday it appears the henge, “could possibly be aligned on sunset at two important times in the ancient calendar”.

The henge, which has now been added to the record of national monuments, is in a field below Newgrange, where the passage tomb is illuminated by the rising sun on the winter solstice.

Mr Murphy said the possible alignments of this new henge are “Bealtaine, which marks the beginning of summer, and Lughnasa, which was the time of year when the fruits had ripened and the crops were ready for harvest. Astronomically these are referred to as cross-quarter days.”

A local historian, author and astronomer, Mr Murphy was using his drone last week to view the landscape of the UNESCO World Heritage Site Brú na Bóinne when he spotted the previously unknown circular enclosure just below Newgrange.

It is believed to be a henge and built 500 years after Newgrange, which dates from 3,000 BC.

Mr Murphy said the weather was critical in it being discovered, as the dry spell allowed the feature to be visible against the parched landscape.

The discovery was praised by the Minister for Culture, Heritage and the Gaeltacht Josepha Madigan and made international news headlines.

Mr Murphy also said the dates on which the henge “might have been aligned to sunset, ‘bracket’ the time of year when the sun’s setting position on the horizon had slowed down”.

“If it had a summer alignment, its focus was in contrast to the Newgrange passage tomb, which is aligned on midwinter sunrise. I look forward to further archaeological investigation of the henge and indeed to a more precise calculation of its possible alignment.”

It also emerged last week that drone footage taken by Ken Williams, who was also imaging the Boyne Valley with Mr Murphy when the henge was found, has revealed what could be the first henge to be discovered in the vicinity of Newgrange but on the southern side of the river.

It is one of two circular monuments visible on the footage and on land directly across from Newgrange.

Archaeologist Dr Stephen Davis, UCD, said one of the monuments is “very henge-like” and if this is confirmed and given its location, “in terms of being on the southern bank of the Boyne, it is quite novel”.

Why Didn’t You Just Do What You Were Told?: A superb collection
4

Olga Tokarczuk’s Nobel lecture: ‘Tenderness is the most modest form of love’
10