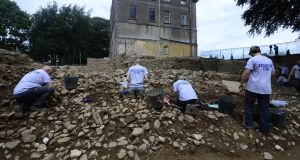 Add to that list now Brú na Bóinne in Co Meath, where a series of discoveries reported over the past fortnight has raised yet more questions about an ephemeral and highly elusive people who once lived in the Boyne river valley.

“It is the most amazing coincidence,” says Archaeology Ireland editor Dr Sharon Greene.

The one big unanswered question is the nature of the settlement, how these people lived and what motivated them to build these monuments

And there may be yet more developments, on foot of a project led by Dublin City University (DCU) medieval historian Dr Matthew Stout and Boyne Valley archaeologist Dr Geraldine Stout. The husband-and-wife team are overseeing the first set of excavations at Newgrange since the 1980s, funded with a grant from the Royal Irish Academy.

“It has all captured the public imagination, and is raising the consciousness in relation to the value of this work,” says Greene. “To find a new passage tomb, as occurred at Dowth last year, is almost unheard of – and in such good condition,” she says.

The new Dowth burial chamber, about 40m in diameter and half the size of nearby Newgrange, was discovered during investigations by the agri-technology company Devenish and the University College Dublin (UCD) school of archaeology.

One of the six kerbstones, which is decorated with Neolithic carvings, is among “the most impressive discoveries of megalithic art in Ireland for decades”, the archaeological team led by Dr Clíodhna Ní Lionáin has concluded.

“These stones would have been brought down from Clogherhead, Co Louth, as greywacke – a type of sandstone – and it is a fairly esoteric material which is not local to the Boyne Valley,” Dr Steve Davis of the UCD school of archaeology explains.

“We are assuming that, as with the existing Newgrange, Knowth and Dowth passage tombs, the stones were brought by boat,” he says.

“It was considered a great honour in megalithic societies to be involved in the transport [of such materials],” Davis says. “So building the tomb would have been a great social event.”

The Unesco world heritage site at Brú na Bóinne is on a par with Stonehenge and Carnac in France, he says. Dr Conor Brady of Dundalk Institute of Technology concurs.

Brady, who has been involved in extensive work in the area over the years, observes that the focus for decades on Knowth and Newgrange “blinded people to the narrative of the wider landscape” around the Boyne.

“The one big unanswered question is the nature of the settlement, how these people lived and what motivated them to build these monuments,” Brady says.

“Monuments are irrefutable physical evidence, and crop marks [such as those recorded recently in Brú na Bóinne] represent traces below ground level – but discovery of artefacts such as flint tools offers another level of detail about how the society ran,” he says.

“The thread running through this landscape was the Boyne, regarded as sacred. River corridors plied by skin boat were the motorways of their day,” Brady explains.

“There is evidence from excavations related to the M1 motorway that the settlements were concentrated on a 6km corridor each side of the river, and it would be wonderful to see the full detail of this published,” he says. He also believes small-scale excavations could help to complete the jigsaw puzzle.

Discoveries as a result of extreme weather have also occurred in Britain and across Europe, while there are “constant new finds” on the western seaboard by Connemara archaeologist Michael Gibbons and colleagues amid the continued drought.

Gibbons, Richard Long and Fearghus Foyle have recently identified a number of new lake dwellings or crannógs, some of which are connected by a series of causeways, while fresh details on known sites were also revealed during the dry spell.

However, extreme weather has also taken a heavy toll. Storms and tide surges over several winters from 2014 have eroded or destroyed fragile coastal features, from landmarks dating from the Neolithic period to more recent settlements such as Cromwell’s Fort, from the 17th-century, on Inishbofin.

Gibbons has repeatedly called for a dedicated State archaeological “rescue” unit. He also believes that “excellent work” by the Discovery Programme on the east and south coasts should be extended to the Atlantic seaboard in Connacht and Ulster.

Like his colleagues, Gibbons believes the new Dowth passage tomb is “enormously significant”. It gives a fillip to a much misunderstood profession, which is often caught between planning pressures and national and international obligations to conserve sensitive locations.

It is also a profession which is among the first to suffer during economic downturns. The Archaeology 2025 strategy initiated by the Royal Irish Academy notes that the numbers in the profession fell by 80 per cent between 2007-2014, while from 2010 to 2014 the heritage budget of the then department of arts, heritage and the Gaeltacht was cut by 44.6 per cent.

Whereas politicians now have greater appreciation of the value of – and photo opportunities provided by – this specialised field, this has not translated into pay levels. This issue was highlighted recently in Macroom, Co Cork, where members of Unite’s archaeology branch voiced concerns about pay rates at a protest on the town’s bypass.

There is also an underlying concern about what An Taisce terms “cultural rebranding” of national monuments for tourism purposes at the expense of conservation. It has recently called on Ms Madigan to undertake an independent review of the impact of Star Wars filming during 2014 and 2015 at the Skellig Michael Unesco world heritage site in Co Kerry.

Year on year since the film work, and associated Fáilte Ireland publicity campaigns, there has been a continued increase in visitor numbers in excess of those agreed with Unesco in a 2008 management plan, it points out.

The new Dowth find has its own complexities. It is below an 18th-century house, which has been owned by Dr Owen Brennan, executive chairman of Devenish, and his wife, Dr Alice Stanton, since 2013. Public access will, therefore, be restricted.

There had been calls for the State to purchase the property when it previously came up for sale, as it would have provided a link between the Newgrange complex and the site of the Battle of the Boyne.

As reported by Elaine Edwards in this newspaper this week, the Department of Heritage originally opposed plans for the redevelopment of the protected 18th-century house by its current owners. It wrote to Meath County Council in November 2016, shortly after the owners applied for planning permission to significantly extend and renovate the building, to express its concerns about the negative impact of the plans on the site’s “architectural heritage significance”.

The department’s intervention came before the discovery of the large passage tomb.

A 2015 archaeological impact assessment by Ní Lionáin recorded eight monuments on the site and numerous “sub-surface” archaeological features. Yet Meath County Council granted planning permission for the redevelopment on November 30th, 2016, within weeks of the department’s letter.

The State’s handling of the new discovery will provide a litmus test. A find like this, which comes along every half-century, will pose “very significant challenges to management of the landscape”, Davis says.

Arthur Miller voiced the hopes and fears of ordinary Americans
9

The old television that brought down one village’s broadband
10