Irish Volunteers 1916 stand-off in Cork to be remembered 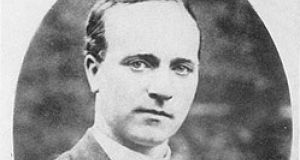 Tomás Mac Curtain, who was later murdered by members of the RIC in 1920, was the Brigade Commander of the Irish Volunteers in Cork city and county in 1916.

The mobilisation of 1,000 Irish Volunteers in Cork under the command of Tomás Mac Curtain in preparation for the 1916 Easter Rising will be remembered on Saturday with a pipe band parade from Mac Curtain’s home in Blackpool to the city centre.

Mac Curtain, who was later murdered by members of the RIC in 1920, was the Brigade Commander of the Irish Volunteers in Cork city and county in 1916 and he had organised volunteers to march to Kerry to collect guns from the German ship, the Aud which was to land the weapons at Fenit.

Mac Curtain and his comrade, Terence MacSwiney directed some 400 men to march west to Macroom but after receiving mixed messages from Dublin that the rebellion had been cancelled, Mac Curtain decided on Easter Sunday evening to send his men home.

However when the word came through on Monday evening that the Rising had started in Dublin, the Cork members of the Irish Volunteers occupied the Volunteer Hall on Sheares Street near the city centre and a major stand-off developed with the British forces in the city.

There ensued a week-long stand-off between MacCurtain and his men and the British authorities before a deal was brokered through Lord Mayor of Cork, Thomas Butterfield and Bishop of Cork, Daniel Coholan which resulted in the Irish Volunteers vacating the hall.

The deal involved the Irish Volunteers agreeing to hand over their guns on the understanding they would be returned at a later date in return for being allowed to return home but Mac Curtain was arrested and detained in Frongoch internment camp in Wales along with those who fought in Dublin.

Mac Curtain, a keen piper who founded the Cork Volunteers’ Pipe Band in 1914, will be remembered along with his comrades who occupied the Volunteer Hall on Easter Week when pipe bands will march from his home in Blackpool to the National Monument on the Grand Parade.

The New Mexico Fire and Police and the Amarillo Firefighters’ pipe bands will join the Newmarket Pipe Band at the event which will be attended by the Lord Mayor of Cork, Cllr Chris O’Leary and the Mayor of the County, Cllr John Paul O’Shea and members of the Mac Curtain family.

At the end of the parade Mac Curtain’s own pipes will be played for the first time since his murder on March 20th, 1920.

A hurley as a sex toy? Ah would you camán out of that?