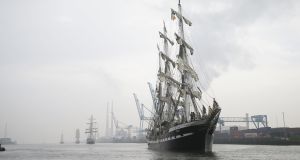 The Scottish Maritime Museum is to stop referring to ships and boats as “she” and instead adopt gender neutral terms after the word “she” was scratched from a number of signs in the museum.

“We can’t afford to replace all signs but new signs are gender neutral,” the museum wrote in a Facebook post highlighting the vandalism.

Museum director David Mann later confirmed that the museum was moving towards gender neutral interpretation and that the process was under way prior to the act of vandalism.

“Like other maritime museums and institutions, we recognise the changes in society and are committed to introducing gender neutral interpretation,” he said.

The practice of referring to boats and ships as “she” is a centuries-old tradition, with many vessels bearing female names and figureheads, from the Santa María to the Queen Mary 2.

Predictably, the news caused a bit of a storm in the seafaring community.

“The ships are seen almost like a mother,” he said. “They preserve us from the dangers of the sea and, indeed, also the violence of the enemy. To change it in this trite fashion is just absolutely stupid.”

The news has been greeted with similar bemusement in the Irish maritime and sailing community, with one yacht club senior figure saying the banishing of “she” was unlikely to happen in Ireland.

“Ships have been called ‘she’ for generations,” he said. “Why are we always so in a hurry to get rid of tradition?”

Mr McCormick, who fished out of Grimsby for years, recalled how sailors became closely acquainted with every nook and cranny of ships.

“When you stay on any ship for any length of time, it becomes very personal to you because it becomes your home,” he said. “You might not feel romantic about it, but a good ship that has given good service and done good work over the years, I think most people mourn it when it’s scrapped or sunk.”

To start referring to them in neutral terms would be impersonal, he said.

“Sailing ships are rather beautiful creatures to look at and to call it an ‘it’ would be, to me, not giving it the due respect it deserves,” he said.

“Whereas if you say ‘She’s a lovely looking ship under way’ that expresses respect for it. Maybe that’s where the tradition came from. They don’t look great in harbour, but out on the high seas in rolling waves, they have their own character and personality.”

“I think a lot of people would want a lot of convincing to change something that is as traditional as that,” he said.

Peter Richardson is the secretary of Royal St. George Yacht Club in Dun Laoghaire, Co Dublin. A small boat sailor, he said he adhered to the tradition of referring to sea vessels as ‘she’ and did not anticipate Irish sailors retiring the term anytime soon.

“My personal view on it is that boats, much as we love them, are inanimate objects, and thus unlikely to take offence at how we refer to them,” he said.

“The club would conform to the norms in Irish society, and if it became the norm in society to use a gender neutral term to refer to boats, we would probably follow suit as a club.

“However, I think it’s unlikely that Irish sailing folk will change their practice any time soon.”

Lewis Capaldi: ‘I’m not Justin Bieber or Ed Sheeran – I’m not getting chased down the street’
10