For Lynn Scarff, its new director, choosing what to collect and preserve is crucial 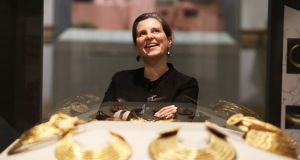 Lynn Scarff, director, National Museum of Ireland: ‘Ultimately the people own this national collection and should be able to pop by and check it out.’ Photograph: Julien Behal Photography

Lynn Scarff ’s first day as director of the National Museum of Ireland was the Monday after the vote to legalise abortion by repealing the Eighth Amendment to the Constitution. “When I came in, Brenda Malone, one of our curators who specialises in banners and military history, was running around collecting as many posters and banners from the campaigns as she could, before everything was taken down.”

A few months ago Minister for Children Katherine Zappone donated her wedding dress to the museum – “a wonderful way to represent the marriage referendum” – which could figure in a tour of existing collections at Collins Barracks from an LGBTQ perspective. The museum’s natural-history branch, on Merrion Street in Dublin, recently acquired a collection of bees, she tells me. “You might say, what’s that got to do with contemporary collecting? But given that bees are under threat, that collection will be critical in the future.” The collecting decisions are huge, she says. “In some respects you’re talking from bees to Repeal banners – and the museum has to figure out its policy.”

There has been less awareness of collecting ordinary items, says Scarff. But large organisations need policies and procedures to guide the process, she believes. A group drawn from the museum’s collecting division and education and conservation teams is looking at “what do we collect, how do we collect it, how do we make decisions about how long you keep it?” Digital collecting, she adds, “is limitless”.

Her approach connects two key aspects of Scarff’s leadership: connecting with the contemporary audience in a way that’s “meaningful to people’s everyday lives” in the permanent collection and temporary exhibitions; and her collaborative, teamworking instinct.

Even objects like the late Bronze Age gold torcs, now displayed after being found in Donegal in 2018 (“that last hot summer, people were finding things left, right and centre” ) can connect with people’s everyday lives, says Scarff. They represent how wealth is stored, how people move around, how they worship. “We can use objects in our collection from the past to not only appreciate that particular time but also as a mechanism to reflect on contemporary society.”

For information and signage, she talks about depth on demand. “What we can provide online, pre- and postvisit”, has great scope. She points to the Rijksmuseum, the Netherlands’ national museum, which made images of its entire collection available online. “That led to a significant increase in its physical visitor numbers. They attribute accessibility to the collection online as crucial. Sometimes our collections are so vast,” and hard to negotiate.

The crucial thing is bringing people together. You have to work with people, give them platforms and provide a real vision and way of moving forward

We’re sitting in a beautiful room in the archaeology branch, on Kildare Street in Dublin, one of the museum’s four public sites: natural history; country life, in Turlough Park, Co Mayo; and decorative arts and history, at Collins Barracks in Dublin, which also houses Scarff’s office.

She came to the museum from the Science Gallery, where she was director. From Portmarnock, she grew up in Dublin, reared on gallery and museum visits. She is a zoology graduate, and her background in natural science is perfect for the “Dead Zoo”, she agrees, “although if anybody looked at my transcripts for my identification exams they’d get a shock – I once identified a fruit bat as a flying monkey or something ludicrous!”

After a master’s in science communications at Dublin City University she worked on Ballymun Regeneration, where she learned that arts and culture “could be quite transformative in how it engaged with communities” on contested local issues.

She was part of the founding team of the Science Gallery, in 2008, and 11 years later brought to the National Museum of Ireland experience of programming that’s thematic and connected to everyday lives, bringing disciplines together and curating by open call.

Her appointment, in May 2018, marked a change at the national museum. Previous directors had curatorial or archaeological backgrounds, whereas hers is education and science communications: “public engagement – that’s where my drive and experience lies”.

There’s a tension in museums between research and visitor engagement. “Rightly or wrongly, in the past they’ve been at odds: the idea that to focus on great research means you can’t have floods of visitors coming in the door. You can actually do incredible research and involve visitors in that process.”

The museum has been dealing with high-profile historical sexual-harassment cases – the phrase “a hotbed of misogyny” was thrown about at one stage. Years later, High Court cases are ongoing, and Scarff says she cannot comment.

Now a lot of women are in leadership roles at the museum. We talk about changing cultures in organisations. “The crucial thing is bringing people together. You have to work with people and their good ideas and creative space, give people platforms and eke out opportunities and provide a real vision and way of moving forward.”

But “I don’t think that I’m bringing radical new thinking into the museum. I’m creating the spaces for people who have probably been thinking this way for a time, to do that work. That’s what good leadership is, creating the culture for: Yes we can do this experiment; or, We can take this risk.”

Somebody said to me recently: when you do the work will the Dead Zoo still smell the same? People have an emotive link to that space and associate it with their childhood

Collaboration fed into Scarff’s process working out a strategy to implement the museum’s long-term vision to modernise and promote learning, creativity and inspiration. The strategic plan grew out of workshops with the entire team across all four sites, coming up with ways to build capacity, develop the collections and engage the public.

A hundred and sixty-eight people work at the museum. “I asked people what should we be working on. People don’t usually get to interact and share ideas.” The surprise was how “ideas were similar, from our visitor security officers to our curatorial team”, including building projects across departments. “Traditionally the museum has had a lot of siloed areas.”

There’s €85 million in Government investment for its first phase, redeveloping Natural History and Archaeology. The Dead Zoo refurbishment will begin within two years, with luck, so first there’s “a significant decamp”. “We’re trying to work out things like, how did the elephant get in the building, and how are we going to get it out?” She laughs at the absurdity.

While accessibility will be improved, “the Dead Zoo is itself a heritage building and museum. We’re preserving it for the future, then thinking about clever ways we can do interpretation. Somebody said to me recently: when you do the work will it still smell the same? People have an emotive link to that space and associate it with their childhood”.

Archaeology’s staff respond to “every single find across the country. It’s part of our legislative remit”.

“The law states if you find an archaeological object on your property and there’s no known owner, it belongs to the State and goes to the National Museum.” The use of unlicensed metal detectors, including children’s toys, to search for archaeological objects is illegal. Soon after we meet, the story emerges of a 3,000-year-old Bronze Age axe recovered by the Garda after being unearthed illegally with a metal detector in Adare, Co Limerick.

“A lot of our curators don’t have a significant amount of time to research,” she says. Scarff hopes to create space through grants to support curators’ research, while the museum’s day-to-day business continues.

Bespoke events – she mentions a recent family day at Collins Barracks, Jurassic Skies – are important for building relationships with audiences. “A young family comes to Collins Barracks and make some wings about flight in our education room, and their kids run riot through Clark Square for half an hour. Two weekends later they’re thinking, Where will we go and have a coffee while the kids run around? Oh, actually, they could do that in Collins Barracks. We need to think about making our spaces people just drop into. It’s really important as cultural spaces that we become somewhere that people just want to be, and feel that they can.”

Sometimes it’s just an amazing space. “Fifteen minutes of engagement with a beautiful artefact can have a big impact on you for the day, just a moment of space and thought.” That Ireland’s national cultural institutions are free helps: “The collection belongs to you. We look after it, we conserve it, we preserve it, we think about ways to interpret it. But ultimately the people own this national collection and should be able to pop by and check it out”.

All the same there are other barriers – “just being free isn’t enough”. Scarff recalls two teenagers from the O’Devaney flats, up the road from Collins Barracks, who hadn’t thought it was “something for them” until they were on a museum education programme and “realised that actually it was, and they could hang out, and they were welcome there”.

Todd Haynes: ‘All my movies are critical and financial disappointments initially’
10