How going Dutch could save more Irish bogs 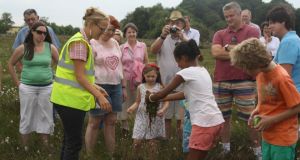 Joni Mitchell neatly summed up a paradox about conservation in a single line from one of her most memorable 1970s songs, Big Yellow Taxi: “You don’t know what you’ve got till it’s gone”.

Or rather, you don’t know you’ve got till it’s nearly gone. And then you have to spend a lot of time, effort and money trying to get it back. “Sustainable development” remains an aspiration in most places.

It so happened that, in the same decade Joni Mitchell was singing her warning, the Dutch suddenly realised they had exploited their once vast peatlands to vanishing point. They did a U-turn, and thought up a radical 50-year conservation and restoration plan that has cost €100 million so far.

To develop the plan, they needed to study peatlands that were still intact and they chose to research Irish bogs. Ironically, this was partly because the Netherlands was importing copious quantities of Irish peat moss for the country’s horticulture industry. If we had so much of the brown stuff, we must still have lots and lots of healthy bogs, right?

So a number of Dutch research students, among them Matthijs Schouten, came to Ireland. They realised rapidly that while Ireland still had a lot more intact bogs than did the Netherlands, they were heading rapidly down the same fatal slope, through overexploitation.

Schouten has not only made a major contribution to scientific research on Irish bogs since then; he also helped to establish the Dutch Foundation for the Conservation of Irish Bogs in 1983.

At the same time, reflecting growing awareness here of the biodiversity value of Irish bogs, the Irish Peatland Conservation Council (IPCC) was established.

By 1987, the Dutch foundation had raised the funds to purchase three Irish bogs. The first title deed was handed over by Prince Bernhard to an Irish minister of state, Noel Treacy, at a high-profile ceremony in the Netherlands. The discreet implication was that our government should really be doing this kind of thing itself.

Slowly, nudged along also by the EU, official attitudes here have indeed shifted significantly. But the most difficult conservation challenge is engaging public opinion positively with conservation issues.

A steady stream of students has followed Schouten’s distinguished footprints, including Ineke Roëll and Marleen Jansen. They published a study of Lullymore Island, Co Kildare, in 2005.

Bog of Allen
Lullymore today is an “island” of agricultural land, cultural sites including monastic remains, cutover bog grassland, and remnant raised bog. It sits in the middle of the Bog of Allen, most of which has been industrially exploited by Bord na Móna for decades, and exploited for fuel by local residents for centuries before that.

This is where the IPCC has its visitors’ centre, with excellent facilities for families, nature, education and entertainment.

Roëll and Jansen had the idea, as did Kildare County Council, that it would be a good idea to develop a loop walk here, taking in both the cultural and natural highlights of the area.

But nothing much happened until Leonie Tijsma, another Dutch student, arrived last April to research her BA thesis. She chose the loop walk as her project.

Last Sunday, the IPCC’s meeting room was packed with local people, as well as the Dutch ambassador and his wife, to hear Tijsma present the features of the planned route, and then to follow her on the first public walk on the loop.

“It’s the first time I’ve been here, and I’ve lived nearby for many years,” said Una Cross after the meeting. Her husband, Val, who pilots a Community Alarm network across four townlands, is a local person, but had been through the centre’s doors only once.

So what had brought them, and many other locals, here on this occasion?

“Leonie. She is a power-house,” said Una. I heard the same answer, in one shape or another, from a dozen people over a delightful afternoon’s excursion. “Better than the zoo, and free,” said one parent. But how did they all know about Tijsma’s work? It turned out that she had togged out on a local football team. She had played drums, for the first time, in a local bar. The Crosses had met her at a walk highlighting youth suicide issues.

In other words, she had got to know people on their own ground before she tried to draw them on to hers. In time, she gets to show people the orchids and butterflies in which Lullymore is so rich.It seems the Dutch involvement in the story of Irish bogs is set to continue.

lTomorrow, as part of a weekend of IPCC bog-related activities, a group of visitors including Schouten will join in a public celebration of 30 years of Dutch links to Ireland at the IPCC centre. See http://www.ipcc.ie/dutch-share-30-years-of-bog-memories-for-the-gathering-ireland-2013/