Fairy forts: Why these ‘sacred places’ deserve our respect

The Healy-Raes remind us of our strong bond to the land. We disconnect from it at our peril 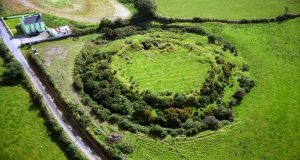 Independent TD, Danny Healy-Rae’s latest claim that fairies are behind the subsidence of a roadway near Killarney may seem farcical, but his defence, citing the numerous fairy forts and other “sacred places” in the countryside, is one of his wiser utterances.

As the 1937-39 Schools’ Collection of the National Folkore Archives makes abundantly clear every community in Ireland believed until recently in its local spirits, who lived in the surrounding bushes, banks and, in particular, the fairy forts.

After eons (potentially millennia) of living side-by-side with these spirits, aka the Little People, Gentry, the Good People or Síoga, and coping with their divilish interferences in our lives and landscapes we have now cast them aside over the course of a few paltry decades.

It is the abrupt denial of fairies by the vast majority of society that is more pathological than Healy-Rae’s continued belief.

After all, our first Uachtarán, Douglas Hyde, and two of our Nobel Laurates, WB Yeats and Samuel Beckett, all believed in fairies.

It is true that science has now proven that the fairy forts (also known as a ringfort, lios or rath) were not in fact the abode of spirits, or entrances to their underworld realms, but instead are the remains of the most common form of one-off housing and defensive outpost in Ireland from the late Iron Age right through the Bronze Age, Early Christianity and up to the Medieval era in some places. Yet that does not mean that these areas are not sacred - if for no other reason that they’ve been used as burial sites for unbaptised babies for centuries.

These circular embankments are all that remain of the defensive structures that would have surrounded the farmsteads and lookout forts of our pastoral ancestors.

Think of the buildings as fortified ranches, surrounded by either one or more ditches and banks, which would have had been crowned by a wooden palisade to keep livestock in and wolves and raiders out.

These mud and stone structures are one of the most common feature of the Irish landscape, with more than 45,000 of them still surviving, and a further 10,000 destroyed since the first survey in the 19th century.

Most are thought to have been constructed between the 6th and 10th centuries.

Any air flight across Ireland or a cursory glance at an Ordinance Survey 6-inch map will reveal a landscape pockmarked with these cup-marks that have been preserved over the centuries out of a deeply ingrained belief that they were entrances to the otherworld, where the Tuatha Dé Danann, the original semi-divine inhabitants of this island, fled upon our arrival.

The fact that many had underground (souterrain) passages burrowing into the earth, made this idea all the more credible, though these passage rarely proceeded very deep and are now understood to have been used for storage, or to provide refuge or a clandestine escape route during an attack.

Look out for circular clumps of trees or bushes in a high spot in any field and the likelihood is that it’s a ringfort, or a cashel, which is the more stone-based defensive structure found in the West of Ireland, where soil was scarce.

Their size will dictate the status of the original inhabitant (and potentially of the spirit being still living there).

A chief or a noble’s residence can be 70 metres wide with multiple banks to encircle the homes, stores and meeting places within, while a humble farmer’s can be as small as 4 metres wide.

In fact, any overgrown patch in a field is worth investigating, as it’ll most likely shelter a grave, or a spring, or some ancient monument that generations of farmers respected or feared enough to preserve.

Again, there is countless anecdotal evidence for Healy-Rae’s assertion that there are real-world repercussions for interfering with fairy forts.

Why else would rational, sophisticated farmers still go to the trouble of leaving unproductive patches of weeds and wild nature in their meticulously manicured, expensively fertilised and pesticided fields?

It is widely believed that the demise of Sean Quinn’s cement and insurance empire in Cavan and of John DeLorean’s sports car industry in Belfast were directly attributable to the conscious destruction of “sacred” ringforts.

For once, the Healy-Raes are not necessarily succumbing to out-dated begorrah-esque Oirrishism, but are reminding us of our strong bond to the land and customs of Ireland that we disconnect from at our peril.

One ping after another: Why we all need a notification detox
5

Why bother to read the Classics today?
10