ESB unveils treasure throve of previously unseen films from the past

Footage released to celebrate the 90th anniversary of ESB

The ESB are celebrating the 90th birthday of their PR department by releasing previously unseen films commissioned by the organisation dating back to the 1920s, such as the 1957 documentary "More Power to the Farmer." Video: ESB 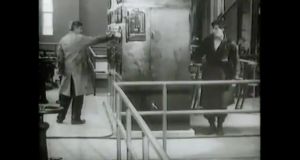 A screen grab from one of the ESB archive films released to celebrate its 90th anniversary Photograph: ESB archive

The Electricity Supply Board has unveiled a wealth of previously unseen footage commissioned by the organisation over the past 90 years.

Released to celebrate the 90th anniversary of the ESB’s Public Relations Department, the films are available to view on the company’s website (esbarchives.ie), where they offer fascinating insights into the structural and economic development of the State.

An early film, later cut to a triumphant soundtrack that gives a near-Soviet feel, details the construction of Ireland’s first hydroelectric station on the River Shannon at Ardnacrusha in Co Clare.

In the 1950s, the ESB commissioned George Fleischmann, an Austrian who had worked as an uncredited camera operator on Leni Riefenstahl’s Olympia, to shoot a series of documentaries beginning with Power for Progress in 1955.

That film works scenes of domestic life in with a chronological history of the ESB from its establishment in 1927 to the time of shooting. Fleischmann, who had crash-landed in Ireland during the second World War while on a surveillance flight, was subsequently detained in the Curragh Camp and went on to shoot countless commercials and documentaries before moving to Canada.

Gerard Healy’s More Power to the Farmer (1957), on which Fleischmann worked as director of photography, considered the Rural Electrification Scheme and its effects on the nation.

The delightful Modern Living Country Style (1961), shot in colour, begins at the RDS Horse Show and goes on - with the assistance of Frances Condell, Limerick’s first female Lord Mayor - to show how a country kitchen can be “made modern and labour saving without losing any of its traditional charm”.

“The films, preserved in ESB Archives, illustrate ESB’s contribution in the evolution of a new and changing Ireland with many having cultural, educational, historical and social significance,” Pat O’Doherty, chief executive of the ESB, said.

“The early documentaries were broadcast in cinemas or local screenings at a time before television arrived, opening Irish society to a brighter future through the electrification of the entire country. We are delighted to release the films online for everyone to enjoy from all corners of the world.”

The website also includes a page dedicated to ESB TV commercials, including the popular Going Back from 1988 in which a young Alan Hughes returns home to the eponymous Dusty Springfield song.