Markievicz devoted herself to fighting for Irish freedom, women’s rights and the poor 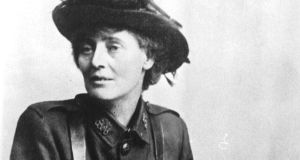 Constance Markievicz as a captain in the Irish Citizen Army.

When Constance Markievicz – from a cell in London’s Holloway Prison – was nominated to stand as Sinn Féin’s candidate for Dublin’s St Patrick’s Ward in 1918, her jailors took notes on her response, reporting her remarks on the recent Bolshevik Revolution in Russia: “Freedom has dawned in the East; the light that was lit by the Russian democracy has illuminated Central Europe, [and] is flowing Westward. Nations are being reborn, peoples are coming into their own and Ireland’s day is coming.”

The fact that Markievicz concluded this proclamation by writing, “We may hope that our road to Freedom will be a peaceful and bloodless one” hardly mattered in the wake of the bloody Easter Rising, in which she had been responsible for at least one casualty.

During her long political career, Markievicz displayed an idiosyncratic combination of pragmatism and idealism. From her involvement with the suffragette movement as a twentysomething in Co Sligo, to her work for suburban Rathmines Council at the end of her life, she believed violence was a necessary means to an end.

In her mind, that end was a socialist republic of Ireland, an ideal from which the majority of Sinn Féin, and later Fianna Fáil, became incredibly distant.

But Markievicz did not think dissent within the Republican party was politically effective. She believed in cooperation without compromise: working with unionists in the Irishwomen’s Suffrage and Local Government Association, attempting to forge solidarity between Cumann na mBan and the Irish Citizen Army, and – perhaps most surprisingly – backing Éamon de Valera’s decision to participate in Ireland’s parliamentary process, in contravention of Sinn Féin’s long-held policy of abstention.

This willingness to engage with her political opponents for the greater good did not dilute Markievicz’s belief in the justification for her previous militant actions. In 1918, she argued that the 1916 Rising was a success, and in 1923 she declared that the Irish Civil War was necessary, since “the Free State was an attempt to build up English civilization in Ireland, and to get the capitalist system firmly rooted there”.

With the advent of Fianna Fáil in 1926, she abandoned Marxist language in her speeches, instead arguing – with disturbing prescience of the party’s late 20th-century manifestation – “Governments were very much like the managing directors of big business, and in their hands lay the prosperity or misery of the people under their control or rule”.

Her rhetoric may have changed, but the underpinning ideas were constant; she also urged in 1927 that the public take ownership of Dublin’s tramway system, and that the Irish people refuse the Electricity Supply Bill, which would give a monopoly to a private body appointed by the Cumann na nGaedheal government. It is easy to imagine what Markievicz would have made of Irish Water almost 100 years later.

Grass-roots activism characterised the majority of Markievicz’s political work, and she was deeply committed to the working class. She frequently risked her personal safety, and famously participated in the armed struggle dressed in her Irish Citizen Army uniform.

But less well known is her work combatting, in plain clothes, the criminal underbelly of the north Dublin slums, where she undertook a “woman’s patrol” in order to reveal the inadequacy of the city’s policing, which made women vulnerable to criminal behaviour as perpetrators and as victims. She was very effective at community-level organisation, and her work contributed a measure of realpolitik to Sinn Féin’s ideologically-driven programme.

Markievicz’s advocacy for working-class people and her willingness (and sometimes need) to partake of three-penny dinners at Liberty Hall did not blunt her sense of entitlement, especially in times of extreme stress. UK Home Office records of her courts martial – there were two after the Rising: the “set up” and the formal trial – show her behaviour, albeit high-spirited, in step with Irish Republican doctrine.

On the other hand, her conduct behind bars was that of a prisoner who believed in first-class treatment. In Holloway Prison, where she was held alongside Maud Gonne, Hanna Sheehy-Skeffington and, for a longer period, Kathleen Clarke, Markievicz ordered fur coats for herself and Clarke (her only remaining cellmate). Evidence suggests she made the purchase with her portion of the Volunteers Dependents’ Fund.

In Aylesbury Jail where she was transferred from Mountjoy after the Rising, she complained of having to “mix with prostitutes and baby-killers”

At another juncture, in Aylesbury Jail where she was transferred from Mountjoy after the Rising, she complained of having to “mix with prostitutes and baby-killers”, and expressed disgust with the prison’s “atmosphere of a brothel”.

The reference to “baby-killers” can seem extraordinary given her own role in radicalising child soldiers through the Fianna: boys who were killed in the Easter Rising, or who grew into young men that died in the Anglo-Irish and Irish Civil War. She felt these losses deeply, but her most personal letters to her sister Eva are unwavering in the belief that these sacrifices were noble and necessary.

Day-to-day activities of many middle- and upper-class people in the heady years of the Irish Revival show how their lives are a jumble of parties, protests, and political meetings. As an extroverted personality, Markievicz drew an extraordinary amount of energy from these social engagements. She took great pleasure in being busy, so in the revolutionary years her time spent “on the run” befitted her, especially during the Civil War when she was generally occupied with running an underground propaganda campaign.

A woman who excelled in headlines was not very well suited to life in the Dáil, where her speeches were often pitched at the same rhetorical level as if they were copy for the radical press. Brilliant at mobilising a mass electorate, Markievicz was valuable political capital for Sinn Féin, even if she was a political liability when it came to high-level diplomacy.

Talented as she was in garnering popular momentum for the movement, Markievicz failed to bring the same level of attention to her individual relationships, not least her marriage to Casimir or her interactions with her children, Stanislaus and Maeve. Family life seemed less interesting and less important to her than the political work for which she had an innate talent, and to which she believed she was ordained.

In appraisals of her life, there has been a popular fixation on the idea that Markievicz was a “bad mother”

In appraisals of her life, there has been a popular fixation on the idea that Markievicz was a “bad mother”. But her difficult dealings with immediate family members mirror the way that some of her closest friendships came under strain due to her lackadaisical communication.

In 1918, imprisoned with Clarke, Markievicz believed her own behaviour was especially considerate; she wrote to Eva that she was painting solely in watercolours since Clarke’s health was poor and “I did not like to even suggest inflicting the smell of oil on her”. Clarke, oblivious to the thoughtfulness, wrote letters home about Markievicz’s annoying habits: talking incessantly, “throwing her cigarette ashes around and flicking the paint and water off her brush”.

Similarly to her interactions with Clarke, Markievicz neglected to tell Maeve that her reason for not requesting visitations in jail was that she was self-conscious and did not want to be seen by her daughter in such a state; meanwhile she treasured a picture of Maeve that she had asked Eva to send. Maeve remained ignorant of her mother’s motivations and was left resentful, assuming even after Markievicz’s death that she had been discarded altogether.

The lack of attention that Markievicz paid to small interpersonal details – the minutiae on which relationships perish or flourish – is indicative of her general verve for big social and political ideas, and her impatience with the particulars that are the making or breaking of a democracy. She was enamoured with certain theories, especially during periods of solitary confinement when she read deeply into political treatises, but on her release from jail she enthused in her public speeches and private correspondence about concepts such as land nationalisation and co-operative “soviets” without pausing to develop a precise strategy, or stopping to take the time to build the consensus among the rank-and-file that is necessary to effect radical political change.

Especially susceptible to caricature because of her flair for theatrical self-presentation, Markievicz is an easy scapegoat for all that went wrong with the so-called Irish Revolution. She is also an example of what can go right, principally the advancement of gender and social equality.

Lauren Arrington is head of department at the Institute of Irish Studies at Liverpool University, and author of Revolutionary Lives: Constance and Casimir Markievicz, published by Princeton University Press