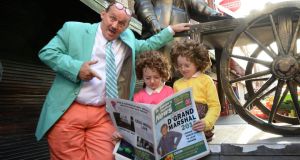 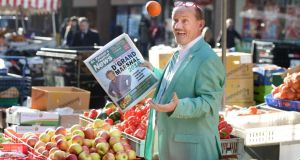 Brendan O’Carroll, has been selected by the St Patrick’s Festival as Grand Marshal to lead this year’s Festival Parade in Dublin on March 17th. Photograph: Dara Mac Dónaill / The Irish Times

Brendan O’Carroll of Mrs Brown’s Boys fame has been named as the St Patrick’s Day 2015 grand marshal, capping off a successful year for the actor and comedian.

“I attended the Dublin parade in all weathers for over 50 years, from sitting on my sister’s shoulders to having my own children sitting on mine.

“I cannot believe that I’m going to get a moment to lead this wonderful gathering,” said an ecstatic O’Carroll, as he posed beside a plaster cast statue of his female alter-ego in her spiritual home on Dublin’s Moore St on Monday morning.

O’Carroll, whose Mrs Brown’s Boys was the most watched programme on TV last Christmas, said despite his success he never expected such an honour to be bestowed upon him.

“I’ve never even dreamed of it. I’ve dreamed of playing for Ireland, but I’ve never dreamt of walking for them. The thought that they would ask me never crossed my mind, so it was a big surprise.

Mrs Brown’s Boys sitcom and movie was also one of the top grossing films across Britain, Ireland and Australia last year.

“I’m from a union household so I’ve spent a lot of time marching- mostly in protest!” said the man who hails from a family of 11 children, and is the son of former Labour chief whip Maureen O’Carroll.

Such is his popularity the organisers of the event to reveal the grand marshal had quite a job preserving the carefully planned pageantry of the unveiling as local well-wishers posed for photos and voiced their adulation for the Bafta-award winner.

Ever the entertainer, O’Carroll came equipped with some typically risqué anecdotes to illustrate his affinity with our national celebration, including an inauspicious New York experience with a certain Irish Times writer of old.

“I was determined that I was going to do the New York parade and have a good day without any drink, it was about 7.30am in the morning and Maeve Binchy was staying in Fitzpatrick’s Hotel. She arrived down and put a vodka and Coke in front of me, and after about 11.30am that day I don’t remember much.

“I woke up the next day, and I had a tattoo of a dragonfly on my back,” he admitted.

The theme of this year’s parade will be ‘Celebrate Now’ as a prelude to next year’s 1916 anniversary celebration which will look to Ireland’s future aspirations over the next century.

Around half a million people are expected to attend next month’s procession, which has an estimated value of over €100 million to the Irish economy.

Speaking at today’s launch, O’Carroll also spoke of his hope to begin filming Mrs Brown’s Boys 2, which he says could happen as early as next year.

Earlier, as a crowd gathered on Moore Street before the announcement, speculation on the likely candidates as this year’s guest of honour ranged from Conor McGregor to Panti Bliss.