Boy George: The bits 'Who Do You Think You Are' didn't tell you about singer's Irish family 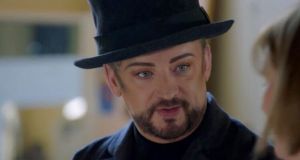 Boy George: his family tree reveals some interesting Irish branches on ‘Who Do You Think You Are’

Singer Boy George has likened his family story to a sad Irish song that a drunken relative would sing at a funeral or a wedding.

The Who Do You Think You Are? programme broadcast on BBC1 on Wednesday catalogued a tale of multiple tragedies.

Industrial schools, tenement living, infant mortality, TB, the first World War, emigration and a hanging in the cause of Irish freedom - all the woes of early 20th century Ireland seems to have visited his maternal ancestors.

The programme was especially focused on the story of Thomas Bryan who was married to Boy George’s great-aunt Annie Glynn.

He was executed on March 14th, 1921 for his part in an attempted ambush in Drumcondra, Dublin during the War of Independence.

Glynn was pregnant when her husband was arrested and her baby died just four days before he was executed.

Boy George is visibly stunned by this revelation. “How much more tragedy can you put into a story? It’s sadder than even I could have imagined. Could it get any worse?”, said Boy George. It could.

Before he was executed, Bryan wrote a letter to his father-in-law stating that he was willing to die for Ireland, but lamented that it was the “women who suffer the most”.

Bryan’s military pension file, which did not feature in the programme, reveals a tale of poverty and desperation which continued long after his execution.

Glynn is described in the files as a “frail and delicate-looking woman who appears to be in poor circumstances”.

While he was alive, her husband handed over his entire weeks wages as an electrical engineer “with the exception of a few shillings which he retained for cigarettes etc”.

She had been wholly dependent on him and after his death was dependent on the support of the White Cross which provided financial assistance to many republican families.

After her husband was executed, she resided in a tenement in Mountjoy Square and was being treated for anaemia when in 1924 she was granted a pension of £90 a year for her husband’s service.

The pension provision will “barely suffice for the ordinary necessities of life” and she asks that arrears be paid going back to 1922.

Tragically, Glynn did not live long after that. She died in 1930 aged just 30. The cause of death is given as heart failure caused by phthisis (acute tuberculosis). The State paid her funeral expenses which were £21.6.0.

Bryan’s parents James and Mary also claimed dependency on their son. They were clearly in desperate financial straits as judged by the voluminous correspondence in the files.

Thomas Bryan grew up in a tenement at 14 Henrietta Street, Dublin, which coincidentally is now the site of the Tenement Museum.

The family are described in 1928 as being “absolutely in want”, in poor health and had pawned everything with the exception of their bed to survive. James suffered from rheumatic gout; his wife Mary from rheumatism and bronchial troubles.

They claimed that they had incurred great expense in giving their son a trade and he had promised his father that he would employ him afterwards.

The State gave them a gratuity of £100, but his parents said it was not enough to alleviate their sufferings and they claimed for a further £50.

The case went to the then President of the Executive Council (effectively Taoiseach) WT Cosgrave, but the Department of Defence said they were not convinced that his parents had been wholly dependent on Bryan before his execution.

Two of the Bryan children tried to claimed the pension which was allocated to his widow, but they are were turned down on the basis that it was non-transferable.

Eventually the State relented and in 1975 gave Bryan’s sister Mary an allowance of £673 a year.

Though she married an ardent republican, the programme claimed that Glynn lost her father Joseph fighting with the British army in the first World War.

There is no entry for a Joseph Glynn in the Irish Memorial Records which lists 49,400 Irishmen or those who served in Irish regiments who died in the first World War.

Tracy Chapman: ‘Being in the public eye is uncomfortable for me’
10