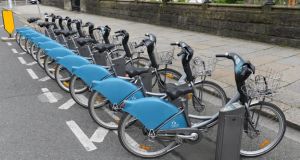 “Even on smooth surfaces, a bag of bottles in the metal basket of a rental bike can be an astonishingly noisy thing. Transporting them across cobbles, however, you’re likely to lose weight just from the embarrassment.” Photograph: Frank Miller

Never mind spin classes. For the ultimate, bicycle-based workout, what you need is a Dublin rental bike and a circuit chosen from the city’s extensive collection of cobbled streets. God knows, even on tarmac, the bikes bespeak a design intended for durability rather than comfort. But it’s on a stretch of cobbles that their masochistic exercise potential is best experienced.

Slip one into third gear and let rip along, say, Essex Street in Temple Bar. You won’t have gone far before every muscle, ligament, tendon, and sphincter in your body will be “engaged”, as they call it in pilates. It’ll feel, suddenly, as if you’ve been strapped to the handle of a jackhammer on wheels.

The emergency will be felt most keenly in the buttock area. But even long-dormant muscle groups, conscientious objectors to all exercise, will be isolated and subjected to assault. Soon they too will be persuaded, in the immortal words of the rapper, to “shake it like a Polaroid picture”.

Your teeth will be hopping off each other too. In fact, you’d be well advised to have a dental check-up beforehand, because any loose fillings will be shaken out in the first two minutes.

As an add-on, you might consider combining your cycle with a trip to the bottle bank. Again, even on smooth surfaces, a bag of bottles in the metal basket of a rental bike can be an astonishingly noisy thing.

Transporting them across cobbles, however, you’re likely to lose weight just from the embarrassment. It works even better if you emptied the bottles yourself. Drawing the entire city’s attention to how much you drink can be mortifying, I’m told. I know a man who was so ashamed he took the pledge afterwards.

Stonemasons among you who, even now, are writing to the editor to suggest that I don’t know the difference between “cobbles” and “setts” can stop, by the way. I’m well aware that most of Dublin’s so-called cobbles are, strictly speaking, setts. And that for actual cobbles, you’d have to cycle across the square of Trinity College, where the workout might be increased by pursuit from a security man ordering you to dismount.

I also understand that it’s not the setts, per se, that make cycling on them so bone-jarring. It’s how the setts are set. Tar should not be used, I’m told, because it wears away too quickly, as it did in the original Temple Bar paving scheme, leaving streets with lower tar levels than many cigarette brands.

Other cities seem to do it better. I don’t remember cobbles being an impediment to cycling in Paris, for example, although I was there in the heady summer of 2007 when the Velib scheme first opened, setting an example since copied across the world.

Caught up in the madness then, I single-handedly Velib-erated the 12-road junction around the Arc de Triomphe, which had been occupied by homicidal drivers since 1945. But as for the street surfaces, I don’t recall them presenting serious resistance.

Of course, as another Flann O’Brien anniversary approaches, the big question is what effect the collision between Dublin bikes and Dublin cobbles has vis-a-vis the writer’s famous theory of molecular interchange.

As all Flannoraks know, humans and bicycles alike are composed of tiny subatomic particles that whizz around in a manner, according to Sergeant Pluck, “as lively as 20 leprechauns doing a jig on top of a tombstone”.

Prolonged periods of contact between man and velocipede, exacerbated by friction, can cause dangerous transfers of these particles, leading to such tragedies as the poor postman who became less human than his bike.

Then there’s the moral question. In Sergeant Pluck’s world, interactions between ladies’ bicycles and humans of the opposite gender, or vice versa, were as rare as they were scandalous. But what would he have made of the French-inspired (naturally) arrangement whereby unisex rental bikes are now shared by large numbers of strangers, with lack of suspension and uneven street surfaces adding to the indecency? The issue may hover over next week’s annual Mylesday, when fans of Brian O’Nolan’s various personae gather in Dublin’s Palace Bar, 49 years after he died on April 1st, 1966. Starting at 3pm on Wednesday, the event will include readings by Phelim Drew, Ed O’Loughlin, Siún Ní Dhuinn, and many others.

If you’re so inclined, convenor John Clarke (drjohnclarke@gmail.com) might still be able to add you to the schedule. But whether reading or listening, be warned. The Palace is in an intensely cobbled area. Rental bike users are advised to approach with caution.