From the archive: The southside of the city was hit harder than less populous northside 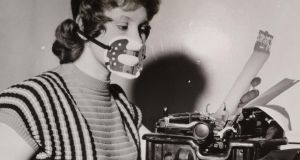 A typist wears a mask to protect against Asian flu in the UK, 1957. Photograph: Daily Herald Archive/SSPL/Getty

Wednesday, June 12th, 1957
There is a lot of discussion about the Spanish flu (H1N1) pandemic of 1918 at the moment, but it wasn’t the only flu pandemic of the 20th century. In June 1957 there were more than a million cases of flu in Asia, as a large part of the world grappled with a flu pandemic later identified as the H2N2 strain.

On June 12th, 1957, The Irish Times reported that the US Public Health Service authorities, “who are keeping a close watch on the new strain of influenza virus sweeping the Far East” had disclosed that American drug manufacturers were developing a new vaccine being tested at the National Institute of Health in Washington. At the time it was believed the epidemic began in Hong Kong in mid-April of that year.

I have spoken to people in Singapore, and Europeans there have not been so badly affected as the others

In Calcutta, “almost every home in the city was affected. Ambulances toured the streets, taking severe cases to over-crowded hospitals.” At that stage, 138 schools had been closed in Tokyo. Two days later the newspaper reported that, as per the Japanese welfare ministry, 500,000 children were affected by flu, and French health authorities were tightening controls at airports.

On June 17th a report quoted Sir MacFarlane Burnet, an Australian virus expert, on the prospect of the flu reaching Britain. “I think it will cover the world,” he said, “and on past experience, I would say that it will arrive in Britain with the cold weather, next winter. I have spoken to people in Singapore, and Europeans there have not been so badly affected as the others. I think it will probably be fairly mild here, but will certainly come.”

That week the World Health Organisation reported that the flu had reached Europe and North America. No cases had yet been reported in Ireland. But then, a strange hope. On July 1st a report stated that “the influenza epidemic which has afflicted millions of Asians appears to be dying out in the Orient, according to Japanese medical authorities. They reported, however, that it could recur again late this year, possibly in a more severe form than the relatively mild virus that swept through China and Japan to New Guinea and Indonesia.” There were some outbreaks among ships’ crews in London and Bristol, and a few cases had been reported in Holland, Hawaii and San Francisco.

As autumn rolled around, the state of the epidemic was being “kept under constant scrutiny by officials of the World Health Organisation Influenza Centre, which was established in University College Dublin in 1948”.

In early October, there were reports in the newspaper of a flu epidemic in Belfast, with 75 teachers and 16,000 school children absent and many adults off work. This epidemic was thought to be separate to what was being called “Asian flu”. In mid-October, three national schools in Dublin were closed due to flu. “Shop staffs have been heavily hit by sickness,” a report read. “The symptoms are headache and sore throat.” At St Patrick’s boys’ school in Carndonagh, Co Donegal, two-thirds of pupils were absent with flu and the school was closed. Also closed was the Convent of Mercy School in Buncrana.

A week later, on October 22nd, the newspaper reported that 17 Dublin schools were closed. “Most of the Dublin schools now closed are on the south side, but an official said that this did not necessarily mean that south-siders are more susceptible to Asian flu – more people live in south Dublin than in north Dublin.” As people began to die from flu or complications related to it in Dublin, the first supplies of a flu vaccine for general distribution were flown from Amsterdam into Ireland.

It was thought to have originated in wild ducks. While Hong Kong was cited as the geographical origin of the virus, it began in Guizhou in China

Some people who were infected experienced only mild symptoms such as a cough or a mild fever, whereas others developed more serious complications, including pneumonia. A vaccine was developed fairly rapidly, and antibiotics were used to treat other infections the flu instigated.

The flu pandemic lasted from 1956 until 1958, with the second wave affecting the northern hemisphere in November 1957. It was thought to have originated in wild ducks. While Hong Kong was cited as the geographical origin of the virus, it began in Guizhou in China, spreading to Singapore, then to Hong Kong and then the US, where about 116,000 people died.