If Michael Collins had not been killed: an alternative history of Ireland

Novelist Andrew O’Connor on an Ireland cast in the image of Collins, not de Valera 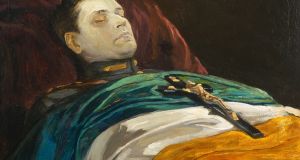 Alternative histories are always interesting to contemplate. By the time Michael Collins was assassinated in August 1922, he had emerged as the key architect and principal player of a fledging independent Ireland waiting to be rebuilt from the ashes after years of brutal warfare.

A hugely charismatic man with an amazing intellect, coupled with outstanding organisational skills, it is fascinating to consider what journey Ireland would have taken under his stewardship had he not been cut down in his prime.

What struck me most when I was researching my new novel, A Great Beauty, was how flexible and adaptable Collins was to circumstances. Overnight, he transcended from his previous life in hiding while fighting the War of Independence to being the centre of intense public fascination when he arrived in London as part of the peace delegation. Instead of shying away from this attention and media frenzy, Collins quickly adapted to it.

Surprisingly, Collins found himself much sought after by London high society. Through his relationship with Lady Hazel Lavery, which is the subject of my novel, he was introduced to and quickly befriended the fashionable set in London. From the friendships that he made there, it is clear that Collins was not of the mindset that to be pro-Irish, one had to be anti-British.

He had lived in London for many years before 1916 as a civil servant working for the Post Office. Perhaps this gave him a greater understanding of the British character that benefitted him in forming closer bonds than other Irish delegates.

Collins received much criticism for the close ties he had established in London on his return to Dublin after his signed the Treaty. It was even ludicrously suggested by Countess Markievicz during the Treaty debate in the Dáil that he had become engaged to the king’s only daughter, Princess Mary.

Had Collins lived and continued to be a principal force in Irish politics, a very different relationship could have emerged between the two islands after independence – a less antagonistic and more co-operative relationship that could have been infinitely more beneficial to both countries. However, this could have led to Collins being seen as just a puppet of the British government in the new independent Ireland, never rocking the boat too much for fear of upsetting the former masters.

When the anti-Treaty forces seized the Four Courts in June 1922, Collins did not want to attack his fellow countrymen and former comrades, knowing it would spark a civil war. His hand was forced by the British secretary of state for the colonies, Winston Churchill, who warned Collins that if he would not restore order, then the British would send their troops to do so. Would Collins then have always bended to the will of the British goverment to avoid such reprisals, the consequence of which would have been to reduce his overriding ambition for a republic to just a pipe dream?

Finance was one of the biggest problems facing Ireland after independence. An accountant by profession, Collins’s organisational skills were notorious and his book-keeping meticulous. As the first minister of finance, before independence had even been achieved, Collins managed to organise a large bond issue for a national loan to fund the new state.

Collins’s ability to raise funds and loans would have been a lifeline to rebuild the nation after independence. Using his natural flair, he would have used the friendships he had made with powerful people abroad to help raise much needed funds. His exceptional organisational skills, ironically learned in the British civil service, would have been a massive advantage for the new state.

It’s hard to see how the disastrous Anglo-Irish economic war of the 1930s would have occurred had Collins been in charge. The land annuities that Irish farmers were due to continue to pay back to the British government had been enshrined as a condition of the treaty. It is highly unlikely Collins would have broken a condition of the treaty that he had fought so hard to deliver and to make a success.

Also due to those close ties Collins made in London, it is unlikely he would have pursued such hostile policies as de Valera did throughout the 1930s. By the sheer fact of Collins being an accountant with a flair for business, he would have seen the folly of having an economic war with Ireland’s main trading partner in the midst of a worldwide depression that caused widespread economic destruction for the country.

While de Valera successfully rowed Ireland further away from Britain and the Empire throughout the 1930s, the country under Collins would have remained anchored to both. When the economic war ended with the Anglo Irish Trade Agreement in 1938, one stipulation was the handing back of the three naval ports of Lough Swilly, Spike Island and Bere Haven that had initially been retained by Britain under the 1921 Treaty.

Had there been no economic war with Collins in power, these ports would have remained in British hands, thus Irish neutrality would have been impossible during the second World War. In any case, the ties between the two countries would have remained much stronger so that Collins would likely have stood by his old adversary Churchill as an ally in the same way as other countries of the empire did like Canada and Australia.

The consequences of Ireland being an ally during the war are daunting, with regular bombing raids on Dublin and Cork and the higher risk of an outright invasion by the Nazis. Ireland’s strategic location in the North Atlantic would have made the country a pivotal player, with American and British bases established here.

As the country moved into the 1950s, however, having avoided the economic war of the 1930s and the isolation of the 1940s, the country would not have faced another decade of further poverty and mass emigration. After the war, the country would most likely have become a member of Nato. As the British empire dismantled, instead of becoming a republic the country would have settled into its role in the commonwealth.

Sociologist Justin Evers believes the main effect Collins’s death had on Ireland was that the country’s economic and social development was critically delayed. “Had Collins lived and been in power, then the advances that unfolded in the 1960s would have begun decades before.”

It is perhaps this then that is the greatest tragedy of Collins’s early death. Had Collins lived, Ireland may have found its place in the world much sooner with a confidence that was often sadly lacking after taking many wrong turns after gaining independence.

With Collins at the helm, Ireland would certainly have enjoyed a more outward, dynamic and progressive image on the world stage rather than the poor, regressive one it increasingly became known for after independence.
Andrew O’Connor is the author of A Great Beauty (Poolbeg, €15.99)