Get deleting. You might be the next Milkshake Duck 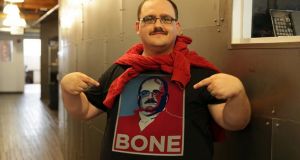 For decades the authors of dystopian fiction have invented ways for future tyrannies to spy on citizens. The secret police will stick electrodes in our brains and siphon off our grimmest thoughts. Miniature robots in the shape of mosquitoes will record us while we express treacherous opinions. The truth has turned out to be more banal. We write that stuff down and post it up in a digital version of the town square.

These thoughts are prompted by the recent elevation of the phrase “milkshake duck” to the standard lexicon. In December, to the surprise of many, “youthquake” (a word I’ve been hearing very occasionally for a very long time) beat this genuine neologism to Oxford Dictionaries word of the year.

Our Antipodean friends have it right. Milkshake duck may not be on every citizen’s lips, but, unlike youthquake, it captures an only recently defined discontent of modern life. One Ben Ward, known to Twitter users as @pixelatedboat, coined the phrase in 2016 to describe a person who, after going dizzyingly viral, becomes discredited when an unlovely past is discovered on social media. “The whole internet loves Milkshake Duck, a lovely duck that drinks milkshakes!” Ward tweeted. “*5 seconds later* We regret to inform you the duck is racist.”

Consider the story of Ken Bone. This was the balding gentleman who, during the second presidential debate between Hillary Clinton and Donald Trump, gained puzzling renown after asking an ordinary question while wearing a remarkable red pullover. Chatter was there aplenty. He soon received an endorsement deal from Uber. Folk-hero status was confirmed when Saturday Night Live depicted him in a typically witless opening sketch. Then it all fell apart.

Jon Ronson has written about running the internet gauntlet in his essential book So You’ve Been Publicly Shamed. The milkshake duck is a particular case of the general condition Ronson describes. Somebody or something is unexpectedly dragged into the limelight. The press roots around in the phenomenon’s internet history and unearths material that poisons a reputation on which the paint has not yet dried.

The digital trail also offers clues to the character of those appointed to positions in public life. Few British people knew the Office for Students existed before Toby Young was appointed to its board. The immediate dredging up of offensive tweets, some objectifying women, made the journo more of a celebrity than he had ever been. He subsequently stood down. More appalling still were the tweets issued by fellow journalist Josh Rivers a few years before his recent appointment as editor of Gay Times. Rivers’s staggering stream of intolerance had taken in anti-Semitism, misogyny, classism and sizeism. He too was forced to resign.

Notwithstanding Young’s expressions of regret and Rivers’s assertions that he had (pretty darn quickly) changed his attitudes, few felt much sympathy for either man. If such views had been expressed in a job interview, then no offer would have been forthcoming. Students reasonably expect their representatives to have civilised views about women. Readers of Gay News expect that publication to be above bigotry. The people who hired Rivers should have trawled the Twitter backwaters before they made their decision. Right?

And yet. The notion of potential employers running through interviewees’ Facebook, Instagram and Twitter is not an altogether comfortable one. Last summer, EU data protection agencies published guidelines requiring employers to provide a “legal ground” before checking the social media of their staff. Any similar instructions issued to those conducting job interviews would be no more useful than a judge asking a jury to ignore evidence that had been ruled inadmissible.

Nothing can stop a decision-maker quietly looking up a Facebook account on their own time. The information is all out there. Once a foolish tweet has been read, it cannot be unread.

So we have only ourselves to blame? Well, yes. But we have been living with social media for more than a decade and, often starting as children, citizens have come to treat discourse there as they would chatter in the home or the pub. They argue when drunk. They give out when emotionally unstable. They make jokes before properly considering the implications. No even vaguely promiscuous user of those media can feel wholly comfortable about their back catalogue being revealed to those in power. We have enabled our own dystopia.

Get deleting. You might be the next Milkshake Duck.

The movie quiz: What mighty age is Olivia De Havilland?
9