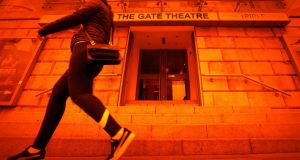 The Gate Theatre. “We wish to express the grave concerns we have around the current inquiry.” Photograph: Leah Farrell/RollingNews.ie

This is a statement of support and intent. We are a group of female theatre professionals who work across the industry as actors, writers, producers, directors, designers and stage managers. We are writing to publicly express our gratitude to, and full support for, the women who have come forward to end the silence around the abuse of power by means of sexual harassment and bullying in our sector and specifically at The Gate Theatre.

Through their courage and integrity in speaking out, these women have, at great risk to their personal reputations, rolled back the carpet on a fierce and necessary reckoning of the power imbalances and gender inequalities that have allowed such abuse of power to persist in our sector.

As artists we fully understand the need to be open emotionally, physically and intellectually and how necessary it is to take risks well outside our comfort zone. However, artistic endeavour and temperament must never be an excuse for abusive behaviour. While we understand there is significant legislation in place against such behaviour, we are also aware of the huge gap between this legislation and workers in our industry feeling empowered to access it.

As freelance employees we are in an especially vulnerable position. Our fear is that by speaking up or calling out such behaviour we will jeopardise future employment opportunities with the individual or organisation concerned. We could be labelled troublemakers. The phone may stop ringing.

The systemic nature of gender inequality was laid bare in Gender Counts; An Analysis of Gender in Irish Theatre 2006-15, commissioned by Waking the Feminists. As women working in the sector we have experienced this inequality throughout our careers and in broader society. For the most part it has been male voices that have shaped the narrative of our workplaces, both on and off stage. The consequences of this for women working in theatre have been destructive artistically, financially and personally.

The gender-imbalanced conditions in which we often work can leave us marginalised in the workplace, vulnerable to abuses of power and prevent us from feeling we have the leverage to speak out. Culturally we have been told that someone grabbing at our bodies is funny, that we are viewed as humourless or unlikeable if we don’t laugh at lewd jokes that demean us, that we should consider coercive sexual attention from a more powerful male flattering.

We all know the internal calculations we have to make, aware that how we respond could determine our professional fate, and meanwhile we can only look back in dismay at the huge drain of female talent from across the industry for generations. All of this when we are just trying to do our jobs.

At this time, our priority is to ensure that the actions of these courageous women become a catalyst for change.

While we welcome the statements from organisations within our community in support of stronger, more transparent policies against sexual harassment and bullying, we also wish to express the grave concerns we have around the current inquiry, set up and funded by the Gate Theatre board to investigate allegations of a long history of pervasive and abusive behaviour in its work place.

Several people who are currently on the board were also in position when these alleged abuses were happening. They permitted the former artistic director of the theatre, Michael Colgan, against whom many of these allegations are being made, to sit alongside them on the board, which was not considered best practice by many in our industry.

Workers testifying to the inquiry will know that their very personal and often painful accounts will be seen by board members who were there when the abuses were said to be happening. If anyone takes a case, some of these same board members could be criticised or found liable for their actions or inaction.

This is no reflection on Gaye Cunningham, whom we understand to be very experienced in the field she is investigating, but we find it difficult to understand how any potential findings can be acted upon with impartiality by the present board or with a real desire to understand and implement what is truly required to safeguard the people who work in their theatre.

Equally problematic is the fact that this inquiry was set up without any reference to – and against the express wishes of – the whistleblowers. They have courageously called out this appalling behaviour, but have been entirely excluded from any discussion as to how their very serious complaints might best be investigated.

Neither has it been established how any necessary redress can be found, nor have they been given any voice to express what they believe could be workable strategies going forward to establish a safe and respectful working environment for all.

We therefore call upon Josepha Madigan, Minister for Culture, Heritage and the Gaeltacht, to talk with the whistleblowers in an effort to find a process of inquiry in which everyone can trust. We appeal to the Minister to develop an industry-wide discussion to help establish the supports and mechanisms needed to challenge the culture which has made abuses of power commonplace.

So many have suffered in silence. We urge the Minister to listen to the workers; we know what we’re talking about.