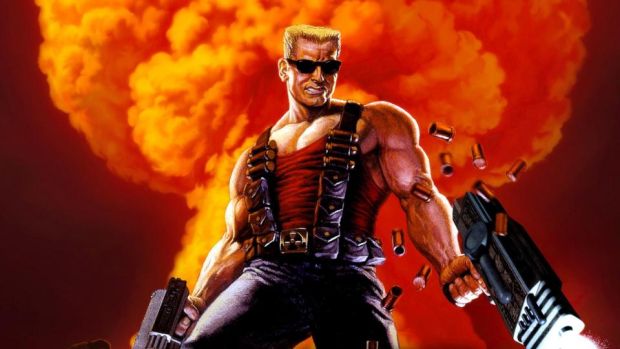 Playing a Duke Nukem game now is like meeting a long-lost, beloved uncle who you’d forgotten was horribly racist. It’s still fun and nostalgic, but that joy is sometimes diluted by the dated and offensive content.

Duke is supposed to be a smart-alec tough guy; Arnold Schwarzenegger meets Ash from the Evil Dead films (even robbing some catchphrases from the latter). But when he throws money at women and says “shake it, baby”, the main feeling he evokes is embarrassment. The sexism graduates to skin-crawling when you meet women who are imprisoned by aliens and you have the option to (quoting the instructions) “put them out of their misery”.

Still, for all its clumsy attempts at edge and irreverence, Duke Nukem 3D is hugely influential. The franchise helped create the open world, first-person shooter as we know it, and its DNA can still be seen in splendid recent games such as Far Cry 4 and Borderlands: The Pre-Sequel.

The gameplay has been tweaked only slightly for this re-release, and it still plays surprisingly well. It glides smoothly and impressively through the various levels (from a beach to the distastefully named “Hollywood Holocaust”); there’s a fine variety of weapons; and the targeting, hiding and firing are well-executed. Your trigger fingers will get occasional breaks as you explore and attempt to solve puzzles.

This re-release doesn’t have a graphics update, so it’s as blocky as you remember (if not more so). There is imagination among the pixels though, in the alien enemy design and some of the locations.

Duke Nukem 3D is a page from gaming history, and it reminds us of what we’ve lost since its heyday. There’s limited ammunition and its health regeneration is much harsher than in modern games. While in the likes of Call of Duty, you can wait out the danger and slowly heal yourself, in this game you only heal when you find health packs. Such limitations completely change how you play the game, and for the most part this is a challenging, intense experience.

Hell yeah! How the satanists became the good guys