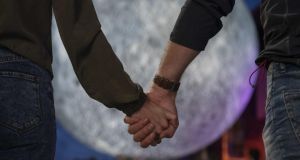 The local, the national, stretching out. Galway International Arts Festival straddles a number of roles: exposure for some of the best local creative work, creating and producing its own original work, and bringing high-quality international work to Irish audiences. The first few days of this year’s festival sees these strands stake a place in a strong line-up.

At the centre of the Festival Gallery is a big, hefty explosion of an installation. The impact of Rock’n’Roll, which the festival commissioned from the Turner Prize-nominated artist David Mach, hits you like an earthquake, with a disruption of car and boat and caravan gushing out of (or being sucked into) a fissure in the earth (or, rather, a break in the concrete floor). They are riding waves formed by tens of thousands of newspapers, which also flow out of windows and gaps. An explosion sitting on the bearer of today’s explosive news: it’s a startling and disturbing sight, and skilfully assembled.

For Enda Walsh’s Office 33A a decrepit room serves as atmosphere, context and setting for a 15-minute tale told at speed by Donal O’Kelly’s voice

The setting for Mach’s work, involving as it does thousands of Connacht Tribunes, is apposite, because the spacious white exhibition space in the centre of the city is the newspaper’s former printworks. Its gracious dimensions have formed a temporary visual-arts space for the international festival – and for the Tulca visual-arts festival, too, among others – for a number of years, because the city that has made a cultural name for itself is bereft of visual-arts space, and crying out for a municipal gallery. There is concern the temporary Festival Gallery’s run as a cultural space is coming to an end. It has been acquired by a developer, and speculation is that it may ultimately become, among other things, a food hall or car park. That prospect, along with the impending Galway 2020 year as European capital of culture, should spur some action on the gallery front.

At the opening were the artist Hughie O’Donoghue and his wife, Clare, no strangers to the festival, which has featured his large-scale paintings prominently in the past.

Sarah Hickson’s Sounds Unseen photographs, also at the Festival Gallery, capture the Calais Sessions – a project among musicians living in the French port city’s “Jungle” refugee camp – and you can almost hear the music (and feel the mud).

And Jennifer Cunningham’s paintings touch a nerve for Galwegians: she evokes decrepitude in places of pleasure such as circuses and fairgrounds. Among those are Leisureland in Salthill, and the nearby Seapoint amusements. The parents of the festival’s artistic director, Paul Fahy, met at that art-deco building when Seapoint was a ballroom, he told guests at the opening. He also invoked the history of the festival transforming unused spaces for events, starting with the first festival, 41 years ago, in a shop unit. Despite aspiring to the creation of a brand-new gallery in the city, he also hoped the festival would retain the energy for taking on a building like this.

The word was very strong from previews of the festival production (with Jen Coppinger) of Incantata by Paul Muldoon, which opens tonight. Another festival original, Enda Walsh’s installation Office 33A, is one of his series of “Rooms” of experience. A few audience members go into a small room – here a decrepit, damp-smelling office, dimly lit by an office lamp, with an old, pockmarked desk and rubble and empty paint tubs in a corner. The room serves as atmosphere, context and setting for a 15-minute tale told at speed by Donal O’Kelly’s voice. A recollection of love, this is no tale of office romance. The piece would work on radio, but the act of going into this room adds another layer. The story is intense, the experience oppressive.

Galway Youth and Community Theatre’s production is of Wit, a complex and satisfying play by Margaret Edison, about a 50-year-old professor of metaphysical poetry undergoing experimental chemotherapy for fourth-stage ovarian cancer. It’s a deliciously erudite, amusing and affecting script, teasing out parallels between medical research and John Donne’s quest in the Holy Sonnets, and the conflicts between the precision and wit of metaphysical poetry – “And death shall be no more; Death, thou shalt die” – and human dignity and kindness in the face of death. The cast is well judged, with a large chorus that pushes and echoes the narrative on its parallel tracks. It is led by a strong performance by Mary Monaghan McHugh as the uncompromising, self-aware professor, Vivian Bearing, who breaks the fourth wall to draw the audience into her challenging world. This assured production is one of two festival plays directed by Andrew Flynn, the other being Decadent Theatre staging of Port Authority, by Conor McPherson.

It’s a rare enough pleasure to see a Druid play in its homeplace, the tiny Mick Lally Theatre, on Druid Lane. This year the Druids have unveiled two powerful examples of new Irish drama there (in Francis O’Connor’s terrific sets, accommodating each; they play in rep), a perfectly claustrophobic and intimate setting. In Cristín Kehoe’s Shelter, five people teeter on personal precipices, as well as on the social edge, as they squat in a disused warehouse set for redevelopment. Sonya Kelly’s Furniture is three thematically related two-handers that are smart, playful and very funny. The ensembles are excellent, and both sharp, accomplished scripts shine, and prove the value of a theatre company nurturing new writers in a structured way over the long haul; both scripts were previous Druid Debut readings.

While Gravity & Other Myths’ virtuoso new Australian acrobatic circus show, Backbone, throws its weight around (literally and impressively), The Fall is an energising show from South Africa, an ensemble work devised by students at the Baxter Theatre Centre at the University of Cape Town, and a hit at the Edinburgh Festival Fringe. Full of beautiful rhythms, harmony and movement, it pulses with South African energy. Written as protesters fought to bring down the statue of the colonialist Cecil Rhodes, it takes as its subject the internal conflicts and competing priorities of a movement as it broadens to encompass the intersecting issues of decolonisation, educational fees, patriarchy and poverty. It manages to be both serious and infectious.

Actors from The Fall joined David Mach and others at the festival’s opening party, where they appeared to be among those to most enjoy dancing to Galway Street Club, the Cajun-and-other-flavoured 12-piece ensemble of street musicians – perhaps a pointed band choice given attempts to curb busking on the city’s streets.

Walking towards An Taibhdhearc to see Baoite (Bait), its coproduction with the festival and the Abbey Theatre, you stumble on street protesters, with gardaí barricading the theatre, and rubberneckers are gradually enveloped in the action. It’s an innovative start to another play about protest, this time with a fishing family defending their village from offshore fracking, and it too teases out disagreement about tactics. The strong Irish-language play (there are surtitles for most of it), written and directed by Darach Mac Con Iomaire, has live music and good visual impact. Perhaps tellingly for Irish social organisation, the community storyline is overtaken by family secrets, moral compromises and old wounds.

Then there are the oddities (in the nicest ways). Who’d have thought that traditional Irish and classical Indian music could fuse successfully? Peadar Ó Riada, apparently, who teamed up with his fellow renowned composer and performer Wajahat Khan (and four other Indian and Irish musicians), as the new ensemble Continuing Traditions, for some intensive collaboration during the festival. It culminated in an intriguing and unexpected marriage performed late on Tuesday night at St Nicholas’ Church. The meld saw each tradition floating in and through the music, creating a sometimes mesmerising sound. More than a few watching were heard to comment: move over The Gloaming.

After surreally floating above Shop Street for opening night, Luke Jerram’s huge floating Museum of the Moon installation relocated to NUI Galway’s new human-biology building for the rest of the festival.

Meantime, the Festival Garden – food and drink, DJs and live sets, information and a box office – at the top of Eyre Square has been taking shape (and seems to incorporate both the window where Mayor Lynch hanged his son and Éamonn O’Doherty’s hooker-sails sculpture) in time for the weekend’s action: cerebral (talks on the theme of home) and spectacle (international street art, including Olivier Grossetête’s The People Build, a floating bridge at Waterside, using thousands of cardboard boxes).