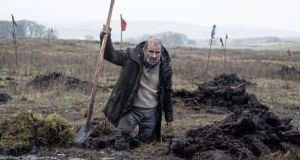 The Dig, the first feature from Belfast directors Ryan and Andrew Tohill, won best film at the Galway Film Fleadh

The 30th Galway Film Fleadh has come to a close with the presentation of the festival’s annual awards.

President Michael D Higgins was at the Town Hall Theatre to see the prize for best film – presented in association with Volta — go the way of Ryan and Andrew Tohill’s The Dig. The busy actor Moe Dunford stars as murderer who, after release from prison, joins a search for the victim’s body in an Irish bog.

The picture charts Taylor’s rise from pioneer – once turned away from gyms that shunned the woman’s game – to her current professional status. Celebratory, but also honest about the complications in her career, Katie looks certain to find an audience on any future release.

The best first Irish feature went to Viko Nikci for his odd, slippery drama Cellar Door. Karen Hassan plays a single mother detained in a mysterious religious institution where the usual laws of nature and logic don’t apply. The film addresses discontents with the Catholic Church through the medium of a metaphysical horror.

This year’s event celebrated three decades since the Fleadh was conceived as a vehicle for new and emerging Irish cinema. Since the first edition in 1989, it has premiered some of the most important releases in the developing renaissance for domestic film. John Carney’s Once had its first screening there in 2006. Recent hits such as A Date for Mad Mary, The Young Offenders and Michael Inside also first screened by the Corrib.

The current event marked the first outing for new programmer Will Fitzgerald and the first Fleadh screenings in the handsome new Pálás Cinema on Merchant’s Road.

Over the last week, the festival screened 25 features, 16 world premieres and 10 directorial debuts.