Path of Blood: al-Qaeda and the wheelbarrow races amid the bloodied corpses

Review: The videos shot between 2003 and 2005, depict stacks of bloodied corpses, propaganda, and young men at play 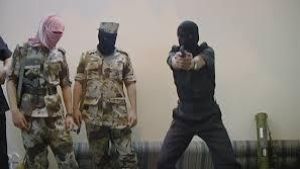 Jonathan Hacker’s Path of Blood is the most fascinating and compromised film of the year. The film, which is largely composed from the home movies of al-Qaeda operatives shot between 2003 and 2005, depicts stacks of bloodied corpses, propaganda videos and young men at play. They laugh, they banter, play football, eat lamb, use finger guns and offer each other practical tips: “The best thing about a car bomb is that the martyr doesn’t feel anything,” one lad cheerfully offers. “Keep the bandana, your hair looks amazing,” says another. An Agony Aunt-style segment on Voice of Jihad asks what to do when you feel like you should turn yourself in.

Four Lions has nothing on the opening sequence featuring a daft young man who simply cannot comprehend when asked whether or not suicide bombing is compatible with Islam. He dodges the question with demands for coffee and with laughter before he gives up: “I don’t understand the question; I wasn’t briefed on this.”

There are propaganda videos (with Tom Hollander intoning as the Voice of Jihad) and there are blustering sentiments: “May our skulls be a ladder to your glory!”

Hacker, who won a Bafta for his depiction of children with alcohol problems in 1998’s Turning Points documentary, has defended his use of footage taken by jihadists. There are awful spectacles throughout the aptly named Path of Blood, but they could be a great deal worse. There is no close-up on the little girl found without a face in the aftermath of a suicide bombing in Riyadh. And the film wisely cuts to black before the 2004 beheading of American helicopter engineer, Paul Marshall Johnson Jr.

The film-maker and his editor Peter Haddon spent a year crafting the film, having gained access to 500 hours of al-Qaeda videos, seized by Saudi military forces at a jihadist training camp. In a project defined by disconnects, by wheelbarrow races between suicide bombers in training, it’s the source of the material that requires the greatest degree of mental gymnastics.

Given the known links between the House of Saud, fundamentalist Wahhabi ideology and al-Qaeda, it’s difficult to accept the film’s “one bad apple” narrative or the idea that the government had no idea about the extent of the network until 2003.  The safe houses and arms dumps tell a different story as does an extraordinary stand-off between armed raiders and the authorities. “We exited out the back and God made them blind to our presence,” says one perpetrator, having somehow walked out of a complex surrounded by armed units. Such contradictions only add to this compelling picture.