Despite Covid-19, key elements from the summer line-up are ready for an autumn showing 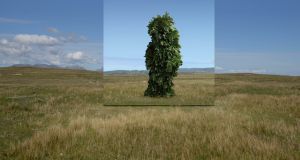 There was no Galway International Arts Festival this summer, but there will be an autumn version for arts enthusiasts. The festival opens on September 3rd with John Gerrard’s Mirror Pavilion, above. See giaf.ie for details

“It felt like we were in the wrong town,” says John Crumlish, managing director of Galway International Arts Festival, recalling what it was like to walk around the centre of the city in mid-July, when Ireland’s biggest summer arts event would normally be in full swing. Usually, the place would be hopping. This year it was “positively funereal”, says festival director Paul Fahy. According to data from the city council, footfall in that period was 150,000 this year, compared to 850,000 in 2019.

There was, of course, no GIAF this summer for the first time in decades. The inevitable was finally accepted on May 1st, when the cancellation was officially announced to nobody’s real surprise. But now here, like a phoenix from the flames, comes Galway International Arts Festival Autumn Edition, with many of the key elements from this summer’s programme revived and ready for presentation.

With the gradual relaxation of restrictions in recent months, much of the visual arts part of the original programme is back on track, while theatre, music and spoken word events also figure.

The festival opens on September 3rd with Mirror Pavilion, a much anticipated spectacular project that has been in gestation for years from internationally renowned Irish artist John Gerrard, known for large-scale outdoor works such as Western Flag in the Coachella desert. It’s a joint presentation by the festival with Galway 2020 as part of the city’s ill-fated stint as European Capital of Culture 2020. The heavily revised Galway 2020 will be announced in a couple of weeks, with an emphasis on the locally-produced parts of the original programme. “I’d say Galway 2020 is really starting now,” says Fahy.

Gerrard’s structure is composed of three sides and a roof clad in a highly reflective mirror and the fourth wall a high-resolution LED presentation. Two new artworks will unfold on the LED screen in two locations; Corn Work at the Claddagh Quay in Galway City in September and Leaf Work at the Derrigimlagh Bog in Connemara (from October 11th-31st). The works reflect and respond to the landscape of both locations in a response to the escalating climate crisis and fearlessly pushes the boundaries of digital art using simulation. Gerrard has taken digital technology, usually employed by the commercial gaming industry, to create virtual worlds that simulate extremely detailed and authentic landscapes.

A small audience of 50 or so (based on social distancing requirements at time of writing) will get a “one-night-only” peek on September 26th in the Black Box Theatre at Domhnall Gleeson, Clare Barrett, Aoife Duffin and jazz percussionist Sean Carpioa in a new Enda Walsh play, Medicine, which is at a work-in-progress stage. Medicine, which examines society’s response to mental health concerns while deconstructing the fabric of theatrical performance, will not be streamed.

Apart from Medicine, many parts of the festival will have an online element

“Pavilion had been in the pipeline for a long time, two years, so we were committed to keeping it going,” says Fahy. “The only thing that has changed is the dates. Similarly with other things. Medicine was going to premiere and then continue on tour. We’re really keen to keep that momentum going.”

Apart from Medicine, many parts of the festival will have an online element. You can take virtual tours of the Mirror Pavilion and of Hughie O’Donoghue’s new show in the Festival Gallery space, where a Bill Viola show will also be seen.

There’s an online exhibition by photographer Sarah Hickson on people who have lived or are living in Direct Provision in Galway. First Thought Talks Live series will be broadcast across GIAF’s social channels and as podcasts, with speakers including Samantha Power, Prof Luke O’Neill, Marion McKeone, Colm Tóibín, Gaia Vince, Eamon Dunphy and Fintan O’Toole.

“There’s no substitute for up close and personal,” says Crumlish. “But we’re also very conscious of communicating with the people who can’t come out.”

Social distancing guidelines, and the absence of the large paying audience, have huge implications for what is possible

Fahy points out that GIAF has never been afraid of digital experimentation, but believes that initial explosion of online performance now needs to move to a new level, both in terms of the work that’s produced but and in getting audiences to value and to pay for them.

There are other events that involve real people in real spaces. Changing Room, written by Enda Walsh and designed by festival director Fahy, is the seventh in their series of collaborations. In Pan Pan’s version of Samuel Beckett’s Cascando, the audience is led through the city streets with headphones. To celebrate 250 years since the birth of Beethoven, ConTempo will perform a series of live concerts featuring some of his most-loved pieces for string quartets in St Nicholas’ church.

Social distancing guidelines, and the absence of the traditional large paying audience which Galway usually commands, clearly have huge implications for what is possible. Crumlish estimates box office revenue will be 10 per cent of what it was last year. There’ll be none of the big crowd-pleasing (and coffer-boosting) Big Top gigs, while international tourists (usually 20 to 24 per cent of attendance) won’t be around. The festival hopes that gap will be filled to some extent by people coming from around the country to Galway. But the unavoidable question remains: how do you support the livelihoods of the people and the infrastructure on which an event such as this festival depends so it can survive and revive next year and into the future?

Both Crumlish and Fahy recognise the significant steps already taken by the State to shore up the arts sector through wage subsidies and unemployment payments, as well as the large additional payments being routed through the Arts Council and other agencies. “It’ll be great to see those schemes rolled out. The sooner those monies are made available the better,” says Fahy, who cautions that the council will need “at a minimum the same again next year”.

The future remains highly uncertain. Fahy says he is being “positive and practical” about planning for 2021. “We’ll be looking at possibly three different scenarios,” he says, depending on what the situation is with Covid by next spring.

“I think there’ll have to be investment in human capital,” says Crumlish. “So far in 2020 the State has stepped up. But there’s a bigger question to be addressed of holding all that skill and expertise, the fabric of it all, together.”