Francis Brennan: On My Culture Radar 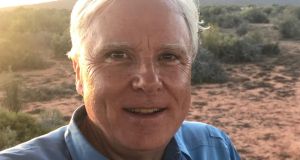 I loved Liz Nugent’s Skin Deep. It’s a terrific thriller, and I won’t give the plot away. The way she portrays characters is a bit creepy – you just know it’s a thriller. I love the way she writes. She just gets the darkness of it. It’s very well put together.

The Duck in Marlfield House Hotel in Gorey, Co Wexford, is just fantastic. Mary Bowe is the owner there. They opened around two years ago. Her daughter did all the decor, and the food is to die for. They have a huge vegetable garden so you see the chef picking your salad and it’s on your plate 20 minutes later. I last went there in spring, and they had a lovely shank of lamb served on cous cous with salad – it was just gorgeous.

I’m not good with these fellas now. I usually look at them and think “What are they on about?” But last night we went online to try and find videos of Maureen Potter, who used to do the Gaiety Theatre panto every year. She did a parody where she comes out with around 55 medals and explains what each of them is. Any age group would enjoy it. A more recent one is Des Bishop. I loved his immersion skit: “Turn it off!” “Why was it on?” The immersion used to rule our life.

I’m only back from America two weeks – I finished up Route 66 on the Friday, and Joe Dowling, ex-Abbey Theatre, opened The Tempest in San Diego’s Old Globe Theatre the next day. It was a one-in-a-million chance. The play was fantastic; it was all done in a modern style, even down to the way they dress.

Pauline Bewick, who’s here in Kerry. She paints in vibrant colours. I have a couple of paintings upstairs and I look at them every day when I come down.

I love Conor O’Brien’s Villagers. I think he’s a beautiful songwriter, and 2016’s Where Have You Been All My Life? is out of this world. He writes sensitively, and his songs turn out very nicely. I heard yesterday that he has a new album coming out in September, and I’m looking forward to that.

Chicago has everything everyone wants: lovely tourist sites, lovely boat rides, a beach, the Magnificent Mile for both high-end and low-end shopping, great hotels and loads of history. I always go to the theatre when I’m there. I saw Hamilton last time, but they always have something on like Phantom of the Opera or indeed Chicago. Where would I recommend to stay? The last couple of times I stayed at The Drake, run by Damien McArdle who’s an Irish lad.

I love Mikel Murfi in The Man in the Woman’s Shoes. I’d seen it before but last night I brought four people to see it in the Carnegie Arts Centre in Kenmare. It’s 75 minutes and a one-man play, which isn’t easy. But he pulls it off – the way he contorts his face to be different characters is brilliant. There’s sheep and cat and dogs as well, and he makes their sounds convincingly. My friend thought it was a sound effect.

I got folding scissors from a Christmas cracker 25 years ago. I keep them in my briefcase, and if I’ve used it once I’ve used it a thousand times. It comes in useful to other people, too, and when I was in a car accident around 20 years ago, the nurse used it because they had no scissors in the emergency department in Tralee. And it goes through airport security. I can’t think of anything I need more.

That Blue Planet with David Attenborough. The subjects are all beautiful. I love it because you’re learning, but also the photography is unbelievable and his presentation is so wonderful. With the last series, I rushed home to watch it.

The Kite Runner, which is based on a book by Khaled Hosseini. It’s a lovely story, and I think teenagers can appreciate it was well as adults. I saw the play as well in London, and it’s not often a book, film and play can turn out so wonderfully.

Dear Life: Answering our questions about death without us having to ask them out loud
9