Books by Haverty, Theo Dorgan and James Harpur, plus Heaney poems selected by his family 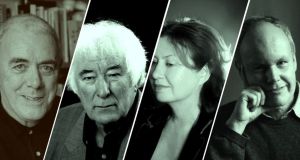 Paris, Lisbon, Aarhus, Poland, India, Russia and, most of all, Armenia are among the places visited in Anne Haverty’s new book, A Break in the Journey (New Island, €13.95), but what the poems catch, wherever they travel, is a particular sensibility, which is wry, distant and amused.

When she writes a poem called Innocence, she appreciates the quality it describes:

You come home
From the park
Your black coat covered
In pink blossoms
From the flowering trees
And, dear dog,
You don’t know it.

The same wiser but indulgent perspective appears in Poor Ladeen, whose new-born lamb is “between new grass / and the butcher’s block”, or more strikingly in a poem whose title, Beautiful Day at Birkenau, tells its own story.

Odd shifts in perspective give the poems a fable-like turn as in The Nun and the Greyhound and the title poem and Porn, where the lines “The boy / could be you // decades ago. // Immersed in words / lost in a book// constructing illusions” switches to, “His face / is rapt above / a touchscreen’s light.” There is often a real freedom and lightness in the work of the novelist-poet, and this is true of Haverty’s short line and episodic structures, with images and reflections and interjections leading on one from the other, dotted with arcana from the places she visits. A sequence on vodka is typically whimsical, and charming: “Sweet little well / of melancholy, of bright / and tragic hopes, of a tale / in a state of collapse on the Prospekt, / oh, reckless little tumbler.”

One of Theo Dorgan’s avowed models, Robert Graves, said: “There is one story and one story only,” and for Dorgan the Orpheus story is that compelling narrative. Dorgan’s new book, Orpheus (Dedalus, €12.50), revisits the myth that previously featured in his 2010 collection, Greek.

In the first of two narrative sequences, an Irish singer-songwriter moves abroad to seek fame and fortune; in the other, a Greek traveller (Orpheus incarnate) eventually settles in the village where he had, at first, been treated with suspicion. In both sequences, Dorgan tells the story of the intertwined relationship of desire and poetry, and examines the costs of creativity.

Dorgan matches his choices of form and theme, constraining his phrasing and line breaks by setting himself the unusual, demanding task of writing in sapphics

In both, the male speaker is “driven or drawn”, as the first poem puts it, compelled to write, by the woman he falls for. His troubadour character experiences the electrifying moment of inspiration, and rediscovers it: “A brief affair, a kindliness, had lifted / me into some grace.” But he also acknowledges the “dark energy” creativity brings with it: “how far you ran, I accused myself, how far / you went to avoid your own deep-scribed desires.” Later, the singer can say “I hope to die old”, but still wants “one more cold challenging glance” from a muse.

The parallel narrative sketches Orpheus’s return to ordinary life, rejecting the time when “I was enchanter / – and arrogant with the gift”. He embraces routine instead, “a music all its / own. Work and the silence around it, the pause / in the melody // and then the beat resumed.” Avoiding the more patriarchal poetics of Robert Graves, this vision of inspiration is, for the most part, domesticated and no longer destructive: “pipe and lyre laid / beside pruning knife // on the votive shelf.”

If the poems dwell thematically on taming the fated, unruly nature of poetic inspiration, they also insist formally on neat craft and labour. Dorgan matches his choices of form and theme, constraining his phrasing and line breaks by setting himself the unusual, demanding task of writing in sapphics, albeit he sometimes sets aside the rhythms that form demands in his syllabic quatrains. Just as defining is his choice of point of view: Orpheus’s self-conscious, poetic voice translates each of the poems’ scenes into an allegory about inspiration.

James Harpur’s The White Silhouette (Carcanet, £9.99) begins and ends with affecting, companionable poems about family and loss and travels across Ireland and England: “Rosslare night; chalet on a ghostly estate. / Sound of wind in a chimney” (The Journey East), he writes, but the book’s most ambitious work is its two long sequences about spiritual journeying.

Kells describes encounters with the four illuminated gospels of the Book of Kells, indicating ways in which they articulate fears and anxieties around belief: “Yet I dread my empty mind / will mirror the emptiness of death”, he writes, but also, “paint formlessness – paint it / through form: Christ was spirit and flesh, / and painting incarnates the spirit.” This sequence can seem very willed, as it struggles with these questions; Graven Images is more powerful in its account of damaged images, in this case religious art which has been the subject of iconoclastic attacks: “Fragments / spilled across / a light box / like loose change: / dark shapes – trapezoid / arrowhead / knapped flint; / inklings / of colours”.

Selected by his family, Seamus Heaney’s 100 Poems (Faber, £10.99) is a reminder of the integrity and scope of his work. There is something blocky and permanent about the order, one after another, of individual poems such as Digging and Death of a Naturalist and Blackberry-Picking, then Broagh and Anahorish, and then The Tollund Man and Punishment and Casualty.

Bold and fraught poems, drawing on his relationships with his parents and extended family, predominate in the book’s second half, from Clearances to Keeping Going and Two Lorries and the haiku 1.1.87 (add those numbers together for the poem’s total syllable count). The selection also carries with it the flavour of the particular events and history through which he lived, as well as the tender, bare-headed lyrics of his last books, poems such as The Blackbird of Glanmore, Had I Not Been Awake, and The Door Was Open and the House Was Dark. Essential reading.

John McAuliffe’s fourth book is The Way In (Gallery Press). He teaches poetry at the University of Manchester’s Centre for New Writing