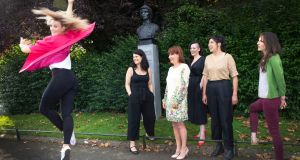 The first recipients of new arts awards to commemorate Countess Markievicz have been announced.

The awards, designed to support the work of dancers, writers and theatre makers went to: Sibéal Davitt, Claire Kilroy, Isadora Epstein, Louise Lowe and a collective of poets which include Annemarie Ní ­ Churreáin, Kimberley Campanello and Dimitra Xidoous.

Minister for Culture, Heritage and the Gaeltacht Josepha Madigan introduced the scheme to mark the 100th anniversary of Constance Markievicz’s appointment as cabinet minister.

The Minister said the awards are a tribute to Markievicz and her pioneering work.

Speaking at the Markievicz limestone bust in St Stephen’s Green, Dublin, she said: “There were over 100 applicants and the Arts Council decided the winners on merit. There are certain criteria entrants must consider: they had to be living in the Republic of Ireland and if not they would have to demonstrate that the work would have an impact on Ireland. They also have to have an artistic profession and must be acknowledged by their peers”.

The bursaries are intended to improve the representation over time of the roles, experiences and ambition of women through original work in a wide variety of art forms.

Isadora Epstein has been a visual artist for eight years and said the bursary will enable her to focus on her research. “I’m really excited as for the award I’m going to start research on the Dun Emer Guild archive,” she said. “ I’m going to celebrate their work by making a collaborative performance piece with two other Irish artists, Cathy Tynan and Sinéad Onóra Kennedy, looking at how Irish female artists collaborated in the past.”

Sibéal Davitt has been a contemporary and sean nós dancer for 10 years and said she is going to use the money to create a project devised through dance, movement and theatre about the teaching and learning of Irish in Ireland.

“I’m collaborating with the actor Caitríona Ní­ Mhurchú and this award will give us the space and time to ask really important questions and to look at the Irish language critically.”

The Markievicz awards scheme will be open for submissions again in early early 2020.