Star Wars: The Rise of Skywalker new trailer – What we learned

The Rise of Skywalker is the fifth Star Wars film since Disney bought the franchise in late 2012. Video: Disney/ Star Wars 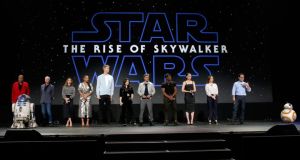 The Force is still strong with Disney when it comes to protecting the secrets of Star Wars: The Rise of Skywalker. A new “special look” at the film that was recently presented at the company’s D23 fan club Expo provides precious little in the way of new footage.

It’s mostly made up of old clips of Luke Skywalker (Mark Hamill), Han Solo (Harrison Ford), Chewbacca (Peter Mayhew) and other characters from the original trilogy as well as less popular figures from the subsequent prequels like Qui-Gon Jinn (Liam Neeson) and the young Anakin Skywalker (Jake Lloyd). At least they left out Jar Jar Binks.

Check out the new poster for Star Wars: #TheRiseOfSkywalker that debuted at #D23Expo. See the film in theaters December 20. pic.twitter.com/FUSZaGQZE6

More recent fan favourites like Kylo Ren (Adam Driver) and Rey (Daisy Ridley) appear in some of the trailer’s only fresh material; they have a lightsaber duel, and she appears to be turning to the dark side.

There’s also a poignant shot of General Leia Organa, played by the late Carrie Fisher, who will be digitally reincarnated for the film.

The clip reinforces the idea that this is the end of the Skywalker portion of the story, but as we all know, Star Wars will live on in future films, streaming TV series and other forms. Directed by JJ Abrams, Star Wars: The Rise of Skywalker lands in theatres on December 20th. – New York Times

Béla Bartók: how music broadened the mind of a ‘nationalist’ composer
6