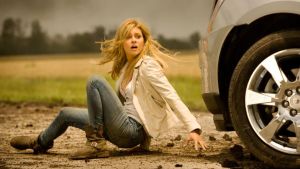 Never mind Rolf Harris. What is the point in prosecuting the sexual molesters of yesteryear when right here, right now, Transformers: Age of Extinction is playing at a multiplex near you?

Following a crummy overture featuring unconvincing CG dinosaurs, the fourth and most abysmal Transformers flick starts as it means to go on: with a shot emanating from between the thigh gap of a 17-year-old female character (Nicola Peltz).

It ’s enough to make one yearn for the relatively rounded Transformers jailbait of old: at least Megan Fox’s character could spout car specs through her over-inflated lips.

The biggest problem with all of the Transformers films (aside from the rapey sexual politics) is that there’s far too much human interest in humans that, well, aren’t awfully interesting. Here, Optimus Prime is forced into an alliance with Mark Walhberg’s wacky inventor as they face a hawkish Republican (played by hawkish Republican Kelsey Grammer), a wealthy industrialist (Stanley Tucci) and ill-defined marauding aliens. Many hours into the run time, dinosaur variations of Transformer product – now available in all good toy stores – arrive with a deus-ex-machina thud to save the day.

Mostly, the plot pivots around a queasy Oedipal triumvirate, as Walhberg’s widowed scientist comes to terms with his adolescent daughter’s racecar-driving boyfriend (What Richard Did’s Jack Reynor). Cue the citation of Texas’s Romeo and Juliet laws as a defence for statutory rape. Ha!

Poor word of mouth has already vanquished Age of Extinction is the US. It dropped some 48 per cent in sales over July 4th, a weekend when, traditionally, a potato dancing at the end a stick for two hours will do boffo box office.

Unhappily for humanity, the film is partly set in China, opened in China ahead of other territories (thus cutting into the piracy market), is punctuated with Chinese product placement, and is super nice about the Chinese government: “We need to call the central government for help now”, cries an official as Hong Kong falls to some CG menace or other. Thus, the PRC-sanctioned picture looks set to break all box office records in a territory that is currently the second most lucrative on the planet.

Extinction? Chance would be a fine thing. Let’s just hope our chums at IFCO follow Sweden’s example and incorporate the Bechdel test into our ratings ahead of the inevitable sequel. This kind of viewing simply isn’t good enough for young girls or young boys.

To those who say rape culture is a myth, we say “Behold, Transformers 4”.