Sweet Country: Once upon a time in the outback 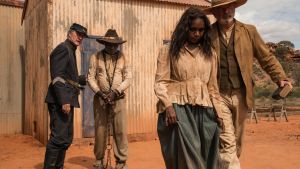 In recent years, the brilliantly talented Australian multi-hyphenate Warwick Thornton has worked steadily as a cinematographer (The Sapphires). He has contributed to the indigenous Australian installation, art + soul. He has made documentaries and short films, including a segment for the 2014 anthology film, Words With Gods.

Still, it is some nine-years since Thornton’s extraordinary debut feature, Samson and Delilah, wowed international audiences and was awarded the Camera d’Or prize at Cannes.

Happily, Sweet Country, the best Oz-based neo-western since John Hillcoat’s The Proposition, was well worth the wait.

Set in the Northern Territory during the 1920s, the baked titular locale is about as wholesome as the similarly named Sweetwater that awaits Claudia Cardinale in Once Upon a Time in the West. The epic comparisons don’t end there. Watch the visual one-two wherein a hanging gallows segues into the building of a church: an apparatus that promises to give and an apparatus that takes away.

Narratively, the film concerns the manhunt for an aboriginal stockman, Sam Kelly (as realised through an incredible turn by non-professional actor, Hamilton Morris). The lowly employee has killed a vicious white veteran in self-defence, and may well face the death penalty.

By the time we get to the crucial courtroom drama (held outdoors in a mocking town-square), we know the victim, a former frontline employee of the crown, has been damaged by the first World War, to the extent that he shoots at everybody randomly.

We know that the accused has tried to protect his wife and niece from white men who would rape them. We know that the earnest Christian preacher (Sam Neill in a career-best performance) who employs Sam, has made a dreadful mistake.

But none of these things may count as mitigating circumstances when a “blackfella” kills a white man. Thus, the unfortunate protagonist finds himself fleeing across the shimmering heat of the Australian countryside of 1929, with a local sergeant (Bryan Brown) in pursuit.

The depiction of Antipodean racial inequality that follows is along the lines of recent American slavery films, The Birth of a Nation and 12 Years a Slave. Thornton’s direction, cinematography and screenplay could not be more impactful or ochre. The ensemble cast are excellent. And the frontier has seldom looked so forbidding.