Review: Not a second is wasted in Lynne Ramsay’s revenge nightmare for the ages

Official trailer for You Were Never Really Here. 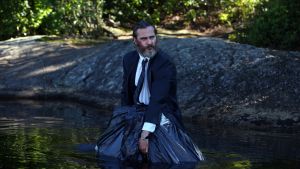 If only Lynne Ramsay had less trouble making films. It is seven years since the release of We Need to Talk About Kevin and five since, citing creative differences, she left the western Jane Got a Gun. That’s it for the current decade.

The extraordinary You Were Never Really Here compensates for the drought. This is the sort of film a few overly impressionable people will declare the best they have ever seen. It has that degree of passion and impact. It has the (literal) guts. Don’t hold that against it. Working quickly, favouring intensity over warmth, Ramsay really has fashioned a tightly coiled revenge nightmare for the ages. The spirits of Jim Thompson and Fyodor Dostoyevsky surge through the work.

You Were Never Really Here follows a familiar enough shape. Based on Jonathan Ames’s 2013 novella, the picture stars Joaquin Phoenix as Joe, a private operative – formerly a US soldier – who spends most of his time rescuing victims of sexual slavery.

A US senator hires him to recover his daughter and punish those who put her through hell. The first death triggers a veritable cornucopia of butchery. Fragile viewers will be fanning armpits and mopping brows.

So much stands out. There is nobody better than Phoenix at conveying numbed psychosis and, more bearded than a retired buccaneer, he excels in tussles with a kaleidoscope of inner torments. He has the look of a man who is never more than five minutes away from processing bad news. He seems weighed down by generations of sorrow. But he is also allowed moment of gentleness.

Ramsay expands Joe’s story in ingenious fashion. The traumas he suffered in the army are dealt with in a brief ambiguous flashback that lasts little longer than three minutes. His own childhood abuse is referenced in muttered shouts on the soundtrack and through a continuing need – apparently inspired by his dad’s bullying – to wrap his head in cellophane.

His sweet interactions with his elderly mother (Judith Roberts) admit just a little kindness into a proudly cruel film.

Ramsay’s sound design has always been a great strength and, once again, she conveys as much through bumps, scratches and screeches as she does through images. (None of which is meant to undermine Thomas Townend’s liquid cinematography.) She is helped in her efforts by a typically brilliant, angular score from Jonny Greenwood.

Ramsay doesn’t shovel on his chords, but the expressionistic sawing is there to heighten already breathlessly tense moments. There are few film-makers so adept at making visual and aural flesh of internal torment. Just think of the jackhammers in We Need to Talk About Kevin. Much happens on the outside here: killings, abuse, fury. But much more happens on the inside.

Such stories have inspired countless Charles Bronson films. You Were Never Really Here is closer in tone to John Boorman’s Point Blank (in its fanatic momentum) or Martin Scorsese’s Taxi Driver (a near-maniac rescues a young girl).

Yet the film remains its own beast. What really sets it aside is its breathtaking economy. You Were Never Really Here clocks in at a mere 90 minutes. It requires a particular kind of ruthlessness to chop so rich a film down to such a disciplined package.

Nuances of plot lurk hazily in the background like cigarette smoke. So much under-story is hinted at that, were she in less restrained mood, Ramsay could have expanded the piece into a pocket epic. There are multitudes in here, but not a second is wasted.

Premiered in mildly unfinished form at Cannes last year to universal hurrahs, the film has skipped awards season to brighten a slack period in the calendar. It is a brash, noisy, violent picture, but it is also a subtle, intricate, thoughtful one.

Ramsay can stake a reasonable claim to being the best British film-maker of her generation.