Buff actors? Formulaic and incomprehensible plot? Must be the the latest dystopian YA sci-fi movie 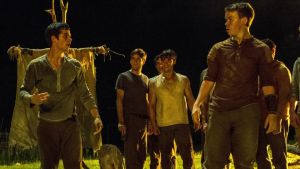 Whither post-apocalyptic young adult sci-fi? With two movies to go, Hunger Games already feels overly familiar. Divergent’s pretty outsiders seemed to emerge from mistranslated mash-up of Nietzschean ethics: Will to Pout, anyone? But The Maze Runner is a genuine cause for despair.

The latest bid to transform some random work of dystopian teen fiction into a box-office business opportunity sees Teen Wolf’s Dylan O’Brien wake up, sans memory, in a glade populated entirely by buff teenage boys: picture a PG-rated banana-boat cruise. This implausible agrarian society comes with nice looking backpacks and is surrounded by unscalable walls. Behind these walls lies an elaborate maze policed by steam-punk spidery things with generic post-Giger faces. So it really is like a cruise.

But why, how and whodunit? These questions are answered with inelegant chunks of exposition. The more we know, the less we understand. It’s as if all five options from the Write A Hit Young Adult Novel were ticked and included in the final draft, up to and including a wizard did it.

Some awfully good actors – Will Poulter, Aml Ameen, Thomas Brodie-Sangster – work hard to breathe life into a nonsensical plot. Depressingly, the film is the first instalment in a sequence based on James Dashner’s Maze Runner trilogy.

Dylan O’Brien’s character Thomas – he conveniently remembers his name, then nothing else – is plagued by visions of Kaya Scodelario and Patricia Clarkson in a white coat. When the latter finally does appear, the extras behind her appear to be making lobster claw gestures in order to indicate frantic activity.

All that’s missing is a pop-up cameo from the late Leslie Neilsen: “Shirley, they won’t subject us to Maze Runner 2?”