The Joker film controversy is exhausting. It does not make a hero of its lead character

Donald Clarke: Almost nobody expressing concern has seen the movie 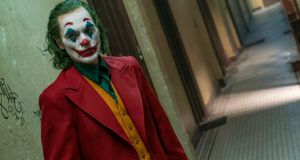 Joker: US cinema chains will ban masks and costumes from screenings

For close to a century, newspapers have got themselves in a tizzy about the possibility that some film or other may have inspired an act of violence. The reports are almost always hysterical and inaccurate.

One notorious panic hung around the suggestion that the horror film Child’s Play 3 had inspired the killers of Liverpool toddler James Bulger. “If you are going to link this murder to a film, you might as well link it to The Railway Children,” Ray Simpson of Merseyside police commented. But the story still persists. As we shall see, A Clockwork Orange and The Dark Knight Rises have also come into the conversation.

Todd Phillips’s Joker is different. I don’t mean that this time the predictions will turn out to be true. I mean that the conversation around such panics has changed in ways we couldn’t have predicted just 10 years ago.

An unusually miserable origin story for Batman’s most notorious villain, the picture follows much the same shape as Martin Scorsese’s Taxi Driver. A young white loner, appalled by the filthy decadence of 1970s New York – Joker is nominally set in Gotham City, but the location is unmistakably the Big Apple – fails to connect with women and gives in to homicidal derangement.

Taxi Driver was a controversial film on its release in 1976, but audiences waited until the film was released before fretting. It was not until 1981 that John Hinckley, obsessed with Jodie Foster’s character, made an attempt on the life of President Reagan. There was general acceptance that the filmmakers could not be blamed for the delayed reaction of an unhinged individual.

Most significantly for the current conversation, commentators grasped the distinction between a protagonist and a hero. Put simply, almost nobody accused Taxi Driver of being on Travis Bickle’s side.

Compare this with the already exhausting discourse around Joker. The trailer alone was enough to inspire virtual tutting on Twitter. “Unpopular opinion: that joker trailer looks like a love letter to kids who become mass shooters and how many awards it will win is why I’m scared of men,” one viral post read.

Unpopular opinion: that joker trailer looks like a love letter to kids who become mass shooters and how many awards it will win is why I’m scared of men

Did it look like that? It depicted somebody a little like she describes, but it was too early to say if it was any sort of “love letter”.

At any rate, the user was right about the picture winning awards. To the surprise of many, Joker took the Golden Lion at the Venice Film Festival and Joaquin Phoenix, transcendent as the careering Joker, was installed as odds-on favourite for the best actor Oscar.

The film arrives this week amid bizarre levels of official fretting. The US military has warned troops about potential violence at screenings. Service members have been advised to “identify two escape routes” when entering cinemas. “If a shooter finds you, fight with whatever you can,” the memo, inspired by an FBI bulletin, continued.

A series of US cinema chains have announced they will ban masks and costumes from screenings of the film. Families of those killed in the 2012 shooting in Aurora, California, which took place at a midnight screening of The Dark Knight Rises, have written to Warner Brothers expressing concern at the gun violence in Joker.

It is worth again repeating that almost none of those expressing concern or issuing warnings has seen the film. Joker is less explicitly violent than Taxi Driver and less gory than a dozen films released already this year (the Irish Film Classification Office awarded it a 16 certificate, rather than the more severe 18 for films such as Once Upon a Time In… Hollywood and Rambo: Last Blood). So it’s not that.

The worries are triggered by the apparent association with the so-called “incel” – or “involuntary celibate” – internet subculture. The loose grouping, which takes in racist, misogynist and totalitarian variations, has been associated with shootings in Texas and New Zealand. As the gun violence in the US becomes ever more out of control, authorities look nervously for any potential inspirations.

Joker could fit the bill. The film does not recommend the protagonist’s course of action. Like Travis in Taxi Driver, Joker is presented as a paranoiac tipped into lunacy by prevailing social discontents. But the picture offers no avenging angel – not even a Batman – to hammer him back into peaceful order. Joker dominates the film.

For all that, Phillips and his team are doing what a thousand filmmakers have done before: probing unattractive trends in contemporary society through the medium of mainstream entertainment. The discourse around culture has changed and has put the Joker team in a place where, by treating an ugly subject, they leave themselves open to accusations of “irresponsibility”.

It is true that directors should consider the messages they deliberately or inadvertently put out to the public, but no artist should be held responsible for the action of a madman who, on Wednesday, chooses this film as a manifesto, while on Thursday, he may have chosen something else entirely.

In 1972, two murders were, on flimsy evidence, linked to the recent release of Stanley Kubrick’s A Clockwork Orange, a story conceived as a response to the rise in delinquency. The director withdrew the film, but he remained sceptical about any such connections. “To try and fasten any responsibility on art as the cause of life seems to me to put the case the wrong way around. Art consists of reshaping life, but it does not create life, nor cause life,” he said.

Todd Phillips would surely applaud those views. But the “reshaping” forces are now so much more diverse and difficult to tame. It’s hard to escape the suspicion that the social-media hysteria about incoming violence may, paradoxically, have made that mayhem more likely. Keep suggesting the film will appeal to incel disruptors and you may eventually catch the ear of the very forces you dread.

None of this would much matter if the US could curb its addiction to firearms.

One thing we can predict. In 20 years nobody will be demanding suppression of Joker. Controversies gathered around Taxi Driver, A Clockwork Orange and The Exorcist. All were more extreme than Joker. All became ornaments of their eras.