Review: There are good reasons why they don’t make them like this any more 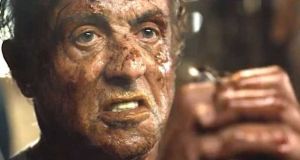 Nearly 50 years ago (gulp), when David Morrell published the nasty, angry First Blood, he can’t have imagined that his lead character would end up providing the most gruesome class of comfort food for middle-aged men in the coming millennium.

The promisingly titled Rambo: Last Blood (“Last”? We’ll see. Shall we?) will not be of interest to people who like only good films. It combines glutinous sentimentality with genuinely horrendous violence in the way only pulp entertainment dares attempt.

The few thin threads that once bound Rambo’s character – an archaic patriotism wedded to Old-Testament justice – have worn away to reveal the vacuum within. Set beside the later Rambo, Sylvester Stallone’s Rocky Balboa has the complexity and nuance of a Virginia Woolf protagonist.

Oh, and did we mention the film is a bit racist? It’s a bit racist. All the hoodlums are Mexican and the nice people from that country rely on a white saviour to rescue them from narco-tyranny.

For all that, watching Rambo: Last Blood feels a little coming home to the long-abandoned hearth. It’s not just that we’re back with a hero who took us from post-Vietnam gloom, to Reaganite fervour and on an absurdly misconceived alliance with the Taliban in Rambo III. Last Blood, directed by frequent Mel Gibson collaborator Adrian Grunberg, has the feel of a straight-to-VHS shocker from the 1980s.

The plot is essentially that of Taken, but it’s grimmer, uglier and more at home to close-ups of recreational torture. There may be good reasons why they don’t make these any more, but make them they don’t.

The plot has John Rambo living quietly with his half-Mexican niece Gabrielle (Yvette Monreal) and an old retainer (Adriana Barraza) on his family’s farm in Arizona. When Gabrielle goes missing on a visit to the old country, Rambo sharpens his knives and heads south with a mind to salvation and retribution. Nothing is achieved without the shedding of much blood.

Last Blood is heading inexorably to a finale that weaves some flavours of Home Alone into the video-nasty stew. The preceding hour and a bit does, however, have enough miserable excitement to keep tolerant fans awake. Yes, the film is made to a formula, but it’s a formula that’s been all but abandoned in the 12A Lycra-jumpsuit era. It’s not exactly a film for grown-ups. But it’s not a film for children either. That’s something to hold on to.

Keanu Reeves: ‘Grief and loss are things that don’t ever go away’
2