The business of belief: an intriguing vision of Knock shrine

‘Whether you believe in the apparition or not, the story itself is fascinating,’ says film-maker Aoife Kelleher, who has a keen eye for local stories that resonate 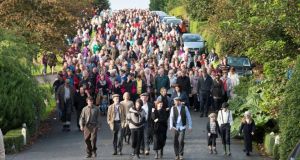 A scene from Strange Occurrences in a Small Irish Village

Aoife Kelleher has a knack for locating stories that Irish people want to hear. One Million Dubliners, her documentary about Glasnevin Cemetery, played for weeks and weeks in the capital’s cinemas. The film was so popular that it stayed on even after a screening on RTÉ.

“It just kept being renewed,” she says. “It stayed on in the Light House [Cinema] even after that. We arrived at Galway Film Fleadh with no idea how people would respond and the response was overwhelming.”

She has now moved on to a subject that seems likely to draw in the same audiences. Strange Occurrences in a Small Irish Village goes among pilgrims, clergy and peripheral players at the Knock shrine in Co Mayo. There was a time when the town – site of an alleged holy vision in 1879 – was at the heart of the national conversation. We don’t hear so much about it now. What drew Kelleher to the story?

“It is a fascinating time to look at faith now,” she says. “This struck me as a very interesting way of doing that. Whether you believe in the apparition or not, the story itself is fascinating. Fifteen witnesses in a dark night in the rain. They tried to wake the priest but he wouldn’t get up because he’d already been soaked.

“We are at an interesting time. The role of the church is being questioned, but we’re not secular yet.”

The film – whose title derives from a contemporaneous British newspaper report – sends out mixed signals about the health of the shrine. More than 1½ million pilgrims – many repeat visitors, admittedly – still turn up at Knock every year, but, as Kelleher says, “You can’t help but notice the white heads.”

A fightback is under way. Fr Richard Gibbons, the town’s parish priest, emerges as the hero. Relatively young, amiable, forward-looking, he seems keenly aware of the need to present a less creaky image of the shrine to the world.

“He was going to be a solicitor and that’s a field in which he would have succeeded,” Kelleher says. “He is a very intelligent man. There is a serendipity to the fact that he’s ended up in Knock, but he says that he was just the guy who happened to be there. He says there was no master plan. He does seem to be the ideal person at the ideal time from the Catholic Church’s perspective. He is doing a good job of making it relevant.”

It hardly needs to be said that the continuing scandals concerning clerical abuse simmer just beneath the surface. Several devout residents acknowledge how those stories have soured the church’s reputation. But the film remains largely positive about the purpose of Knock and about the attitude of the townspeople. There is no hint of snark or cynicism about Strange Occurrences. Kelleher, a graduate of Dublin Institute of Technology, strikes a respectful tone.

“We were quite precious about the tone,” she says. “I was very careful to look back at the footage throughout. I didn’t want to satirise, but you have to retain a distance. You don’t want it to become a religious documentary, rather than a documentary about religion. It’s an observational film. It is about allowing people to tell you what they believe and about their hopes and fears.”

Nonetheless, this environment may seem deeply foreign to many younger viewers. A few short decades ago, any similarly sized town would be awash with all these symbols of the Catholic faith. Knock looks a little as if it’s maintaining a last stand against the advance of godlessness.

“It is extraordinary to be somewhere where everything around you is based on religion,” says Kelleher. “That’s not something you normally see. So many families’ livelihoods depend on the shrine. Then you have this basilica on a hill.”

Which nobody speaks warmly of in the film. “It’s bizarre. It’s like something in a Tim Burton film. It’s like the house in Edward Scissorhands. So it is very visually striking. At one stage I was staying in a B&B and there were pictures of popes everywhere. That was a new one on me.”

Kelleher looks to have cornered one corner of a thriving market. It’s hard to drag punters into cinemas for documentaries. But, as Older than Ireland and Queen of Ireland have shown, local stories about local people can do well.

How has she got so far so quickly? “It’s all about persistence. I was very singleminded in DIT that I wanted to direct. I decided to do film very shortly before my Leaving Cert – much to my mother’s horror.”

Strange Occurrences in a Small Irish Village is out August 26th

The Queen of Ireland (2015)
Conor Horgan’s joyous film celebrated Panti Bliss in the year of her greatest triumph.

Older than Ireland (2015)
Alex Fegan talked to people older than the state, with charming results.

The Pipe (2010)
Stirring study of the fight between locals and Shell over a pipeline in Rossport. Risteard O’Domhnaill directs.