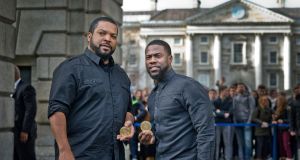 Ice Cube (left) and Kevin Hart photographed at the Trinity College Dublin where they received the ‘Gold Medal of Honorary Patronage for Outstanding Contribution to Actingand Entertainment’ from the Philosophical Society at Trinity College Dublin. Photograph: Brenda Fitzsimons/The Irish Times 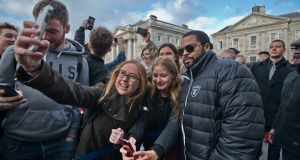 “Mind your own business and you’ll live longer,” was the pithy advice given by hip-hop star and budding movie mogul Ice Cube to a packed house in Trinity College Dublin on Friday.

Los Angeles-born Cube (real name O’Shea Jackson Sr) is a legendary figure in the development of gangsta rap, one of the most successful and controversial musical movements of the last quarter-century.

The former MC with seminal hip-hop crew NWA (Niggaz With Attitude), whose story was immortalised recently in the film Straight Outta Compton, was greeted by rapturous applause at Trinity’s Philosophical Society, where he and comedian/actor Kevin Hart were presented with the society’s Gold Medal of Honorary Patronage for Outstanding Contribution to Acting.

The two were in Dublin as part of the European leg of their promotional tour for the police buddy comedy Ride Along 2, which has been getting some appallingly bad reviews around the world. Indeed, this newspaper’s film correspondent Donald Clarke suggested “you could make a better feature film by repeatedly throwing a camera into a lake”).

Despite the reviews, the film has been the first release to knock Star Wars: The Force Awakens off the top of the US box office.

Since his early days as a rapper, when his lyrics were often attacked for alleged misogyny, racism and the exaltation of violence, Ice Cube has built a much broader career, first as an actor and then as a successful film and TV producer. “I think if you’re creative and love what you’re doing and want to entertain, you want to do as many things as you can,” he told the TCD audience. “True entertainers want to entertain people on all levels.”

African-American film-makers and actors including Will Smith and Spike Lee have announced this week that they will boycott this year’s Oscars ceremony because of the near-complete absence of black nominees. And there have been calls on this year’s host, Chris Rock, to withdraw from the gig.

But Ice Cube was not impressed by the furore and said Rock should stay in place. “What the industry thinks doesn’t matter to me,” he said. “What matters is getting to make the movies and people getting to see them. I never go to the Oscars anyway, so I won’t be going this time. It is what it is. We’re fine, we’re happy and I’ll live.”

“That being said there is a lot of Oscar buzz around Ride Around 2,” interjected his co-star, Hart, getting the biggest laugh of the day.

Derry Girls’ blackboard goes on display as a museum piece
4

The Cure’s Robert Smith: ‘I survived. A lot of people in London didn’t’
9