Spider-Man: Far From Home: It’s flat, low-key and the showdown is a mess

Review: The lack of narrative sophistication is often offset by its splendid cast 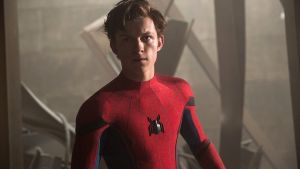 You have to feel for the makers of Spider-Man: Far From Home. Arriving after the much-loved Spider-Man: Homecoming and its buzzier, Oscar-winning animated cousin, Spider-Man: Into the Multiverse, the eighth Spider-Man film since the turn of the millennium is already facing something of a Sisyphean task. And that’s before one considers its placement in the larger Marvel Cinematic Universe (MCU).

Simplicity has always been one of the most appealing attributes of the Spider-Man brand. While other powered crusaders were galavanting around the universe, he was the friendly, neighbourhood superhero, keeping the borough of Queens safe for school-chums and Aunt May. (Or at least that’s how things used to be before the web-slinger followed Robert Downey Junior ’s Ironman past the stratosphere.)

Thus, the final official film in MCU’s Phase Three feels awfully minor after the grandiloquence of Avengers: Endgame. Oh, just the one villain, then?

Far From Home’s lack of narrative sophistication is often offset by its splendid cast. Tom Holland’s Spider-Man maybe the most charming screen incarnation to date. Working with director Jon Watts, the British-born actor has restored the fun that was leeched out of the franchise during the po-faced Andrew Garfield years. Zendaya, who does more with MJ than anyone might have reasonably thought possible, is never less than magical.

Set eight months after Thanos’s defeat, at a time when makeshift grottos to Iron Man have popped up around the world, giving our protagonist cause to brood, Far From Home concerns a school trip. Peter Parker and his likeable, sometimes bumbling chums – including best pal Ned (Jacob Batalon) – head to a postcard version of Europe, where Holland is rendered as a tulip field, a windmill, and a goat at market.

Peter is hoping to make it to Paris where he plans to declare his feelings for MJ. Nick Fury (Samuel L Jackson), however, insists that the young superhero is needed elsewhere, specifically in an alliance with the superpowered Quentin Beck (Jake Gyllenhaal) against marauding aliens known as the Elementals. The kindly Beck seems to fill a Tony Stark (or possibly Uncle Ben) sized hole in Spider-Man’s life. But Peter would still prefer a nice holiday to intergalactic skirmishes.

At its best and funniest, Jon Watt’s second Spider-Man film plays like Sweet Valley High with a powered guest star. But as a Marvel film, it’s a little flat and low-key. The movie’s antagonist – who will be familiar to anyone with even a passing knowledge of Spider-Man – makes for a structurally unsatisfying flip. The final London-based showdown is a mess of CG drones. Endgame was always going to be a tough act to follow. Post-credit scenes indicate that they’re going somewhere with this. We can wait.