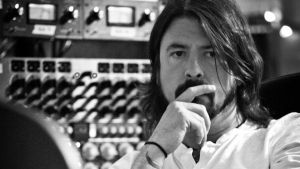 
In 2007, Erika Eiffel, an object-
sexual advocate, married the Eiffel Tower. Madame Eiffel has absolutely nothing to do with rock-doc Sound City , but she would surely appreciate the objectiphilia lurking at the heart of the film.

The Neve 8028 is a one-of-a- kind analogue mix console found in the tatty LA recording studio of the title. This custom-made piece of hardware has enticed and enthralled musicians – particularly drummers – for decades. Here, responding to a distress call from stickman turned frontman turned film-maker Dave Grohl, they assemble to pay tribute as the old place closes down.

Grohl and Trent Reznor, now elder statesmen, chime on the closing of the studio and the contemporary digital age with its Autotune this and Pro Tools that. Other elder statesmen – Tom Petty, Neil Young, Mick Fleetwood, Barry Manilow – reminisce about Sound City’s grot and shag- carpeted walls.

Despite Paul Crowder ’s ( Dogtown and Z-Boys, Riding Giants ) reliable cuts and writing from Mark Monroe ( The Cove, The Summit ), one couldn’t claim it was the most focused of rock chronicles. An overextended final section detailing the coming together of the Sound City Players (Grohl’s sister musical act with Stevie Nicks, Reznor, Paul McCartney et al) often makes one think of the dread phrase “Here’s a song from the new album”.