Colette: Keira Knightley has seldom been better or more dazzling

Review: Dominic West and Fiona Shaw shine in this lavish biopic of the French author

The official trailer for Colette, a biographical drama starring Keira Knightley as the titular French author. 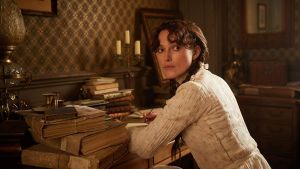 Sidonie-Gabrielle Colette (Keira Knightley) is a pigtailed country teenager living in a corner of Burgundy who is not averse to a roll in the hay with her parents’ slick and much older pal, Willy (Dominic West’s Henry Gauthier-Villars).

It’s only after the naive Burgundy girl has married and moved to Paris with Willy that she – and we – come to realise that he’s a literary fraud who uses ghostwriters to enhance his reputation.

A womaniser, bully and gambler, Willy is reluctant to let the brink of poverty come between him and whoring, so he tells Colette to write a novel.

She writes a bucolic tale recalling her rural childhood. He trashes it. Later, he demands a rewrite with a closer focus on the schoolgirls. The second draft is an overnight sensation, published under Willy’s name.

Various domestic frictions and vile abuses – Willy locking Colette in a room until she writes a second novel, both spouses sleeping with the same American heiress – are left behind as the mononymous author comes into her own among the demimondaines of 1920s Paris.

Westmoreland’s script (which he wrote with Rebecca Lenkiewicz and his late partner Richard Glatzer) isn’t quite cradle-to-grave, but it is forced to cram a great many details into too few scenes. Occasionally, that clutter leads to hasty introductions and unexplained contractions. In other places, it makes for neat innovations: repeated associations with Willy and bowel functions make an already odious character even less appealing.

Knightley, as the titular French writer, has seldom been better or more dazzling. A terrific supporting cast, including the Irish actors Fiona Shaw and Denise Gough (playing the transgender pioneer the Marquise de Belbeuf), enliven the most compressed sequences. The cinematographer Giles Nuttgens ensures this is heritage cinema at its most lavish and gorgeously lit.

By the time the final confrontation between Colette and her husband rolls around, it’s as mouthwatering as any great historical title cards.