Simon Fitzmaurice: ‘I’m a bit of a stubborn bastard’

After his diagnosis with motor neurone disease (MND) and despite being completely paralysed, Simon Fitzmaurice still directed his first feature film My Name is Emily. Video: Ronan McGreevy 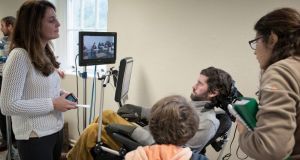 The Galway Film Fleadh is seldom short of world premieres: Once, Glassland and The Butcher Boy all took their bows at the Connaughtian bazaar. But this year’s opening gambit is special, even by the high standards of a shindig recently named by MovieMaker magazine as one of the “25 Coolest Film Festivals in the World”.

Next Tuesday, the 27th annual Fleadh kicks off with My Name Is Emily, the eagerly awaited debut feature from Simon Fitzmaurice. From its inception, the project has acted as a rallying cry for the entire film community: more than €120,000 of the production budget was crowdfunded, with ringing celebrity endorsements from Colin Farrell, Alan Rickman, Sam Neill, Jedward and Lenny Abrahamson.

It takes a village. And a good deal of tenacity.

“I’m, well, to be perfectly honest, a bit of a stubborn bastard,” admits Fitzmaurice. “So I just never stop. My wife will nod. Then I was lucky enough to find two producers, Kathryn Kennedy and Lesley McKimm, who are just as determined – not stubborn. Film-making is entirely a team effort, and I have the strongest core team you could imagine.”

A road movie starring Harry Potter’s Evanna Lynch in the title role, My Name Is Emily sees its heroine team up with fellow teen outsider (George Webster) on a quest to find her missing father, Robert (Michael Smiley), a pop philosopher whose manifesto advocating “more sex, more fighting, more swimming” has landed him in a psychiatric institute.

“I’m sure I think along a lot of the same lines as the character of Robert,” says the writer-director. “I believe in the power of people’s ability to wake up to the fact that they are alive, simply because it occurs in my own life.

“What is interesting to me is how Robert’s well-meaning thoughts become a trap, a system that crushes him. To me it is the danger of solidifying your thoughts, of extrapolating to create a theory that encapsulates everything, because, to me, there is no formula for living.”

There is a decidedly philosophical element to the dreamy, poetic and voiceover-led script, wherein poetry is analysed and molecules are discussed at an appositely molecular level.

Back of the class

“Let’s face it: I’m a nerd,” says Fitzmaurice. “Or at least a want-to-be nerd. When I was in school, I was in a class where everyone was better than me at everything. Genuinely. Maths, Irish, French, everything.

“Except English. English was different. We had the best teacher an aspiring writer could wish for. He was mad. A doctor of English whose sole interest was imaginative composition. I wrote weird emotional stories and he liked them. Made me read them out. It was the beginning of everything.

“I can never know enough, never read, see, do or be confident enough. And that’s fine with me. It’s the fire in the boiler. How that feeds into my work is that I’m addicted to thought in all things, whether in film, literature, philosophy, conversation, or myself. Thoughts, bound up with emotions, have been my obsession since I picked up a pen to write down some of my own.”

Fitzmaurice was a promising young film-maker with two award-winning shorts under his belt, when, in 2008, he was diagnosed with motor neuron disease. Ruth, his wife, learned she was pregnant with their third child on the same day. Simon was given four years to live. He has subsequently beaten those odds and gone on to father two more children, the twins Sadie and Hunter. The family count among Greystones’ best-known residents.

His memoir, It’s Not Yet Dark, published last year, opens with a frank account of the attendant practicalities: a life that requires a motorised wheelchair, a home ventilator, eating through his stomach and communicating through eye-gaze technology.

“Preparation was key,” says the director. “In every department. I spent a very long time storyboarding. Pre-production was seriously intense. Someone was smiling on me because everyone involved was 100 per cent committed. We created a role of someone who would be a specific support to me.

“Enter the miraculous Liz Gill. I’ve never met anyone like Liz. She selflessly dedicated herself to see my vision come to be. On set she was running, literally running, between me and everyone else. My producers were everywhere at once. My sister Ruth, who was my PA, never left my side. And my nurses, especially Paula Cousins, worked tirelessly without complaint.

“It was a different set because, even under tremendous pressure, everyone displayed the utmost patience while I typed my thoughts on screen. It was insane, but as a team we made it work.”

It would be tempting for a critic or commentator to link Fitzmaurice’s medical history with the interior monologues of My Name Is Emily. Yet his earlier films, The Sound of People (2003) and Full Circle (2007) display a similar Malickian bent. The director insists it’s not an entirely conscious influence.

“I’ve loved film since my Dad took me to see The Cat From Outer Space in a cinema in Cork. So countless films and directors have influenced me. But stand-out directors would be Peter Weir, Wim Wenders, Wes Anderson and Terence Malick.

“In my opinion, Terence Malick is one of the geniuses of film, so I would never even attempt to imitate him. But to mention my work in association with his films, you’re talking about the highest standard to me.”

Against the dreaminess, there’s a sense of defiance about the picture. The central characters are every bit as daring and non-conformist as their extraordinary creator.

“That is definitely more of my background,” he says. “I was brought up to believe very strongly in my rights as a person living in a society. My paternal grandfather was a solicitor and, though he died when I was very young, his personality and philosophy were very alive in our home. Your rights surround you, a protective force, I was taught. And if someone violates your rights, you defend them.

“It is part of the reason I’m still alive.”

My Name Is Emily will premiere at Town Hall Theatre, Galway on July 7th. filmfleadh.eu