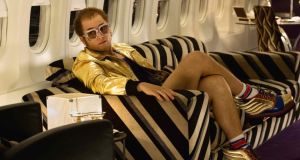 Those glasses. Those songs. It’s billed as “based on a true fantasy”, and it’s coming to a cinema near all of us, soon. Paramount has released a trailer for its new Elton John biopic, Rocketman. Join the 1.5 million people who have already watched it since it was posted, yesterday, and have 60 seconds of 1970s excess wash over you.

The Welsh actor Taron Egerton (from the Kingsman movies) plays Elton John (and does his own singing); John’s husband, David Furnish, is a producer of the film. The man himself is billed as executive producer of his own life story.

Directed by Dexter Fletcher, the film also stars Jamie Bell as John’s lyricist, Bernie Taupin, and Bryce Dallas Howard as John’s mother, Sheila Eileen. The “official teaser trailer” includes snippets of his drug use (he’s seen on a hospital stretcher) and over-the-top performance style, and much footage of platforms and glitter and wild costumes, though less of the gay icon.

There are concerts and studios and swimming pools, floaty dressing gowns and parties, and also what looks like a dancing-on-the-street number and some levitating piano playing.

It opens with a voiceover by Richard Madden (who plays John’s manager and partner, John Reid), saying: “There are moments in a rock star’s life that define who he is. Where there was darkness there is now you... and it’s going to be a wild ride.”

The film covers the singer’s early days at the Royal Academy of Music, in London, and his rise to pop stardom in the glam-rock early 1970s, as he prepares to release his breakthrough album, Honky Château.

And if one dose of 1970s excess isn’t enough, Fletcher is also directing an upcoming Freddie Mercury biopic – although he said in an interview that Rocketman isn’t a biopic. “We have Elton’s songs and Elton’s life story, or a part of it. And it is a fantasy version of real life. It is a true fantasy.”