The Sisters Brothers: Hovering between two kinds of westerns

Review: There’s some terrific back and forth between John C Reilly and Joaquin Phoenix 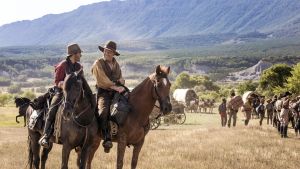 Their latest assignment is to hunt down a chemist, Hermann Kermit Warm (Riz Ahmed, terrific). The mission is complicated by a tracker (Jake Gyllenhaal), who is also chasing Kermit and has a significant head start.

Eli, the smarter and less inebriated sibling, immediately suspects that the Commodore isn’t on the level and, sure enough, it transpires that Warm is the key to a lucrative steampunk invention.

As they clop toward San Francisco, Eli swells hilariously after a poisonous spider bite, Charlie dispenses with a bear, and – in a scene that’s emblematic of the film’s queasy sense of humour – burn down a barn of horses. “Well, we fucked that up,” deadpans Eli.

In Rust and Bone, Audiard proved that he can switch codes with abandon; in Dheepan he demonstrated that’s not always a great idea.

The Sisters Brothers hovers unconvincingly between tones. It wants to be a straight saddlesore horse opera in which men ride and shoot their way westwards. It wants to be a postmodern western which ponders where the American project went wrong and which displays genre knowingness, (“Have you noticed how long it’s been since anyone tried to kill us?” asks Eli).

It equally wants to be a comic western in the mould of Two Mules for Sister Sara. A scene in which John C Reilly tries tooth powder for the first time could have easily featured in Holmes and Watson, his most recent collaboration with Will Ferrell.

There’s some terrific back and forth between Reilly and Phoenix, nonetheless, and Benoît Debie’s cinematography is a wonder.

Paschal Donohoe on how nations play the soft power game to win
8 What is `Beowulf'?
9