The Queen of Ireland review: Tragedy, comedy, a plucky, unlikely heroine, and a sweeping dramatic arc 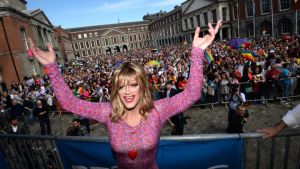 Panti (Rory O’Neill) in the court yard at Dublin Castle following the Yes vote in for the Referendums on Marriage Equality. Photograph: Dara Mac Dónaill / The Irish Times

Film Title: The Queen of Ireland

How do we love The Queen of Ireland? Let me count the ways. It’s not just that the film offers a big, warm, congratulatory hug for a nation which finally learned to stop worrying and love its own people. It’s not only that it’s the most important social document of the century, thus far.

Leaving aside its importance as a historical chronicle, The Queen of Ireland is a super movie, replete with tragedy, comedy, a plucky, unlikely heroine, and a sweeping dramatic arc.

There is, additionally, something of a perfect storm about the project. Conor Horgan has been filming “accidental activist” Rory O’Neill and his more fabulous alter-ego Panti Bliss for some five years. Horgan is an accomplished film-maker – his 2009 post-apocalyptic drama One Hundred Mornings shoulda been a major box office contender, his collaboration with the choreographer David Bolger (Deep End Dance) is a thing of profound beauty – but the presumably non-psychic director could never have predicted Panti- Gate, a victorious constitutional referendum campaign, or O’Neill’s impossibly moving return to Ballinrobe, the small Co Mayo town where he grew up.

A much younger Rory O’Neill is introduced in wellington boots and a tutu. The son of a country veterinarian, he is, by his own account “painfully middle class”. He attends boarding school, and then art school before finding his true vocation: drag.

O’Neill’s return to Ballinrobe as a national heroine – nay, as the monarch of the title – could easily have fallen into the same dull traps as Ireland’s heaving trove of displacement literature: man/woman returns home for funeral/wedding to a place that seems familiar/alien, etc.

Instead it’s a triumph that puts one in mind of Muhammad Ali’s more rousing speeches recorded in When We Were Kings, Leon Gast’s 1996 account of the “Rumble in the Jungle”. It is a spectacle to be relished by anyone who escaped the “dreary steepled” life of small town Ireland so that they might become what they are.

The Queen of Ireland offers a primer in the history of LGBTQ rights, a shapely synopsis that touches on everything from the terrible death of Declan Flynn to the activism of David Norris.

In the brighter tomorrow that Rory O’Neill/Panti has helped us forge, we hope they’ll screen The Queen of Ireland in schools and recite from her Noble Call speech like it’s the US pledge of allegiance, lest this nation ever again slide arse-backwards into the quagmire of ignorant prejudice.

God save the Queen.