Review: X-Men: Days of Future Past

X-Men Days of Future Past - trailer 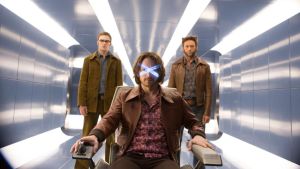 It’s 2023 and the titular mutants are being hunted to the brink of extinction by a fleet of marauding robots known as the Sentinels. Surviving A-lister X-Men – Professor X (Patrick Stewart), Magneto (Ian McKellen), Wolverine (Hugh Jackman) and Storm (Halle Berry) – take refuge in Mongolia, where Shadowcat (Ellen Page) does some hoodoo to send Wolverine back to 1973.

Wolverine’s mission: stop Raven/Mystique (Jennifer Lawrence) from killing Bolivar Trask (Peter Dinklage, only fabulous), the paranoid mind behind the Sentinel programme, an act that historically turned humankind against mutant-kind. Can Wolverine rally the depressed younger Xavier (James McAvoy) and the imprisoned younger Magneto (Michael Fassbender) to get behind the cause?

Among the faithful, the X-Men franchise is the pony to beat. Never mind Iron Man, they say, Bryan Singer’s 2000 film – the first of seven X-Men pictures – was the real game-changer, a springboard for the current frenzied comic book cycle from which there is no respite.

The Xtremists make a good case: The Dark Knight merely had to sacrifice his true love; Wolverine had to julienne his. The Avengers are seldom seen without their pals from the US Army, Navy and Coast Guard in tow; the X-Men aren’t down with the military-industrial complex. Young Adult pictures such as Divergent invariably pivot around themes difference and prejudice: the X-Teens did it first.

Even so, the previous two films in the series (including the reboot, X-Men: First Class) lacked the innovation and efficiency of their predecessors. First Class had great ideas and a superb cast, but it was hindered by too many lamewad characters and an uneven screenplay. Wolverine 2 was not unlike watching somebody’s holiday footage.

Happily, X-Men: Days of Future Past is not just a return to form; it’s a new gold standard for the franchise. Working from the 1981 cycle of the same name – a comic-book sequence regarded by many as one of the best of all time – Days of Future Past simultaneously allows for an X-Men inter-generational mash-up, a potential reset to zero and, should you care to sit through the final credits, the terrifying future of X-Men: Apocalypse.

Lesser X-Men are wisely confined to the sidelines: among the younger batch, only L-Law, Fassbender, MacAvoy and Nicolas Hoult make the cut.

It helps that Singer is back at the helm to do fun things with bullet time: a sequence featuring Evan Peters’s Quicksilver running rings around baffled authority figures is a joy to behold. Lawrence, with some assistance from wires and CGI, kicks many asses between assuming the default crouch position: you know the one: fight, land, crouch, hold fist to ground, look up angrily.

Even with digital enhancements, Singer never loses control of these balletic beat-’em-up set-pieces: the cuts are never too fast or too furious.

The tone, also, is just right. Captain America: The Winter Soldier flirted with the iconography of the 1970s political thriller; X7 allows itself one minute of I’m Gonna Git You Sucka period fun, before it produces Richard Nixon. This movie conspiracy goes all the way to the top.

Local viewers may derive pleasure from the Celtic contingent: this is the first big summer release to include the Gaelicised “shite” among its mild swear words.

Geekier fans may derive pleasure from the notion that X-Men have yet again forged ahead toward Earth-818 in the Marvel multiverse while the Avengers are still languishing on Earth-616. Non-geekier fans should ignore the last sentence and take note: X-Men: Days of Future Past is the best of this year’s superhero films by a long, long way.

Don’t bang your tail on the way out, Godzilla.