A welcome big-screen return for one of the greatest romances ever made, though you may be left wondering just why the film was banned in Ireland until 1962 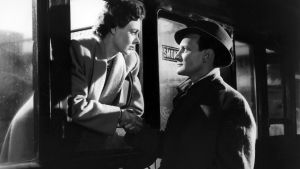 Is there any film that receives more frequent successful revivals than David Lean’s Brief Encounter? Even the same director’s Lawrence of Arabia – forever being revealed in ever-wider stocks – makes fewer appearances than this famously pinched romance. The picture turns 70 this month, but no excuse is needed to rejoin Celia Johnson and Trevor Howard on the platform at Milford Junction (and, once again, remind ourselves that the film was originally banned in Ireland).

Everyone knows what happens next. Surprisingly little.

The couple have a few hurried meals and take a nice trip to the cinema. (“The universe [could] go up in flames, and the world crash around us, but there will always be Donald Duck.”) The most extraordinary moment arrives when Howard takes Johnson back to his flat where they are surprised by an outraged and disapprovingly camp Valentine Dyall. In later years, Lean laughed at the notion – put about by those mad French critics – that the flatmates might be gay. The suggestion now seems close to inescapable.

For all its coy inactivity, Brief Encounter, adapted from a short play by Noel Coward, managed to spawn its own sub-genre. Such projects as Before Sunset and Lost in Translation have taken the structure – described succinctly in the title – in all sorts of unexpected directions.

Yet there remains something timeless about the original model. The notion (becoming rare, even in 1945) of two people shut off from happiness by the strictures of society remains impossibly poignant.

And then there is the miserablist brilliance of the script. Whole chunks of Coward’s dialogue play like excerpts from lost Smiths songs. “If you’d die, you’d forget me. I want to be remembered.” La la la! “Isn’t it awful about people meaning to be kind?” Sing, sing, sing. “We were very gay during lunch and talked about quite ordinary things.” And so on.