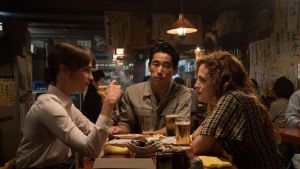 A convincingly mousy Vikander – no, really – seeps hints of ice and fire beneath a reserved exterior. Keough is blissfully oblivious

Commendably drenched in grief and misfortune, Earthquake Bird is a sorrowful murder-mystery that nowadays could only exist on Netflix (with a limited theatrical run). It’s hard to imagine any other major outlet taking a punt on such a grown-up project.

As ever with the streaming giant, a crack team has been assembled just ahead of awards season. Atticus Ross, Leopold Ross and Claudia Sarne provide a glacial score. The gorgeous cinematography is courtesy of Chan wook-Park’s regular Director of Photography Chung Chung-hoon. Jonathan Alberts (5 years) sleekly edits.

Writer-director Wash Westmoreland adapts Susanna Jones’s 2001 prize-winning book about an uneasy European woman named Lucy Fly (Alicia Vikander) who works as a translator in Japan. That sense of unease only increases when she becomes involved with Teiji (superbly essayed by the actor and J-pop star Naoki Kobayashi) a secretive and strange photographer. Their subsequent affair is disrupted by the appearance of a young American named Lily (Riley Keough), who is as devil-may-care as Lucy is reticent.

Earthquake Bird is framed by a police inquiry into Lily’s disappearance, an investigation that is undermined by Lucy’s reluctance and inconsistency. Is she a guilty party, an accomplice or, as several hallucinated sequences suggest, not entirely well?

Throughout there are hints of deeper trauma, the source of which makes for a final reveal, but not before we’re presented with plenty of evidence that death, as Lucy suggests, follows her around.

A convincingly mousy Vikander – no, really – seeps hints of ice and fire beneath a reserved exterior. Keough is blissfully oblivious. Westmoreland – director of Still Alice and Colette – finds plenty of additional intrigue in the late 1980s Japanese setting and maintains a sense of sadness that won’t appeal to everyone, but casts a convincing spell.