Frozen 2: The plot is flimsy but it’s still lovable

Review: The follow-up works a little too hard to be respectful to the original charmer 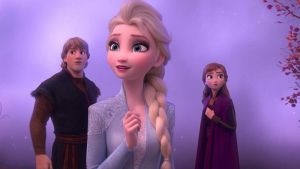 Frozen 2: gets by on slick professionalism

The endless Pixar follow-ups have distracted us from Walt Disney Animation’s commendable resistance to theatrical sequels. You will find crappy successors to The Jungle Book and Pocahontas on DVD (and on occasional “overseas” release). In recent years, they’ve remade hit cartoons lucratively in pseudo-live action. Until last year, however, not one of the studio’s 20 highest-grossing films had generated a full-scale sequel. Then we got Ralph Breaks the Internet. Now we get an inevitable follow-up to the biggest money-maker of them all. Welcome to the real world.

There is a lot of goodwill to be squandered here. Emerging with average expectations, Frozen fully deserved its astronomical success. The songs (one in particular) became part of the decade’s soundtrack. The gently subversive gender politics worked so effectively they generated rebuke from Canadian blowhard Jordan Peterson. A billion fans whisper the mantra “don’t muck it up”.

They haven’t done that. If anything, the returning team – led by Disney animation supremo and Frozen veteran Jennifer Lee – has worked a little too hard to be respectful. Nobody is going to leave Frozen 2 with the impression that Queen Elsa (still magical) has been dissed, Princess Anna (still perky) has been misused or – Heaven forfend! – that Olaf the Snowman (still thick) has lost his psychopathic optimism.

All are treated with dignity in a story that strains so desperately for moral responsibility you half-expect a Salvation Army band to come on at the close. There’s something here about our responsibility to the environment. There is a wise indigenous leader who looks to have been made up as Olwen Fouéré. Most bafflingly, there is an intricate subplot concerning the unethical procedures that preceded the building of a dam that helped Arendelle to snowy prosperity. Forget it, Jake. It’s Chinatown.

What the film misses is momentum. The plot is so flimsy one holds back from putting it on paper lest it blow away in the next mild draught. Following much introductory running up and down stairs, some gossip in Gothic courtyards and a few decent songs that tell us exactly what the characters are feeling, Queen Elsa hears mysterious voices that draw her to an archetypal enchanted forest at the edge of the kingdom. There she encounters reminders that all societies profit from uneven hierarchies and learns much boring “lore” from the area’s pre-history.

While she is engaging with all that fun stuff, Kristoff (Jonathan Groff), the bumbling ice man who loves Anna, stages the sort of vulgar high-concept marriage proposals that make YouTube such an unlovely place. Olaf fights to keep himself upright.

The thinness of the story invites us to ponder inadequacies that were easy to ignore amid the delicious clockwork of the first film. Olaf is more like the mascot for a Slovakian fast-food chain than I would prefer. Kristoff works better as a comic turn than as a romantic lead. The lack of a formal villain – a place taken by the temporarily excluded Elsa in Frozen – feels increasingly conspicuous as the characters flail against various vaguely defined threats.

Yet the film just about gets by on slick professionalism. It will take a while for the songs to set in, but, while no Let it Go announces itself, Into the Unknown and Show Yourself have potential as cabaret belters. The film’s juiciest moment sees Kristoff duetting with himself in a pitch-perfect parody of a 1980s power ballad. More than anything else, the irrepressible goodwill of the piece will keep acolytes distracted.

Yes, there is a nagging sense of “the further adventures . . .” that sucked the energy from those awful DVD sequels. Frozen 2 remains, nonetheless, an honest exercise that exhibits no bad faith. That will probably be enough to be getting on with.